HARTFORD, Conn. – Three years ago, Daniel Berger made one of the classiest gestures in golf history.

Moments after Jordan Spieth made an improbable 61-foot bunker shot and put together one of the greatest celebrations in golf annals with caddie Michael Geller, Berger offered Spieth a “low five” as he prepared to peruse a 45-foot putt to extend the Travelers Championship playoff to a second hole at TPC River Highlands in Cromwell. Berger’s ensuing birdie bid slid just wide on the 18th green, enabling Spieth to become the only player in PGA Tour history to win on a bunker shot in a playoff.

So there was more than a bit of irony Sunday when Berger made a saving par on the first hole in his first playoff since the stunning loss to Spieth and won the Charles Schwab Challenge when rookie Collin Morikawa lipped out a 4-foot par putt after a brilliant 40-yard chip from the rough. Morikawa failed to notch his second PGA Tour victory after making his 21st consecutive cut since turning pro a year ago, a streak that included a tie for 36th in the Travelers Championship where he was one of the four top-ranked amateurs in the world to receive a sponsors’ exemption.

While Spieth said he “felt the earth shake” from the volume of the crowd’s roar at TPC River Highlands, Berger’s third PGA Tour victory ended in virtual silence at Colonial Country Club in Fort Worth, Texas. The Charles Schwab Challenge was the first of five tournaments to be played without spectators after the PGA Tour resumed play for the first time since March 12 because of the COVID-19 pandemic. Only about 15 people were near the 17th green when Morikawa missed and Berger won.

“A little different for sure,” Berger said of the muted surroundings, “but in the end, I was holding the trophy, and that’s all that matters to me.”

Despite the best field in tournament history, including the top five players and eight of the top 10 in the world rankings, Berger’s victory wasn’t all that surprising. He emerged from a plethora of marquee contenders, including Spieth, U.S. Open champion Gary Woodland, seventh-ranked Patrick Reed, Justin Rose, Bryson DeChambeau and Xander Schauffele, after he tied for ninth in the Waste Management Phoenix Open, T5 in the AT&T Pebble Beach Pro-Am and T4 in the Honda Classic in his three starts before the Tour shut down. Despite those strong finishes, the 2015 PGA Tour Rookie of the Year said he worked harder than ever during a 90-day break that helped him remain hot and extend his consecutive rounds under par to a PGA-Tour leading 28.

Berger, 27, made an 11-foot putt on the final hole of regulation for his fifth birdie of the day, a closing 4-under-par 66 and a career-low 72-hole total of 15-under 265. Morikawa, who won the Barracuda Championship in only his fifth PGA Tour start last July 28, had a final-round 67 and also finished one ahead of Rose (66), DeChambeau (66), Schauffele (69) and Jason Kokrak (64). Rose narrowly missed an 18-foot birdie putt on the final hole, DeChambeau bogeyed No. 17 and came up inches short on a 13-footer for birdie at the 18th and Schauffele had a 2-foot par putt horseshoe the cup at No. 17 before missing a 25-foot birdie try at the 18th.

Morikawa, 23, had a chance to avoid the playoff, but a 6-foot birdie putt on the 18th curled left of the cup.

“I actually hit a really good putt, and granted, it was a really bad misread,” said Morikawa, who won $817,500. “I should have brought my caddie in. I hadn’t been bringing him in that much throughout the week, but it was one of those putts out here that it just was really into the grain, really right to left, and I just didn’t read that because I wasn’t reading it that much throughout the entire week, to be honest. Yeah, I’m going to have my head down after that because it was a putt pretty much to win it, but everything from there on was a good putt.”

As for the playoff lip-out, Morikawa simply said, “Not a good putt. … I had full control, so it’s going to be a little bittersweet. I know I’m going to have to look back at it before next week (at the RBC Heritage in Hilton Head, S.C.) and see all the positives, but I’m also going to have to nit-pick what I did wrong. This one bites a little harder, but I’m just going to keep pedaling and look toward next week.” 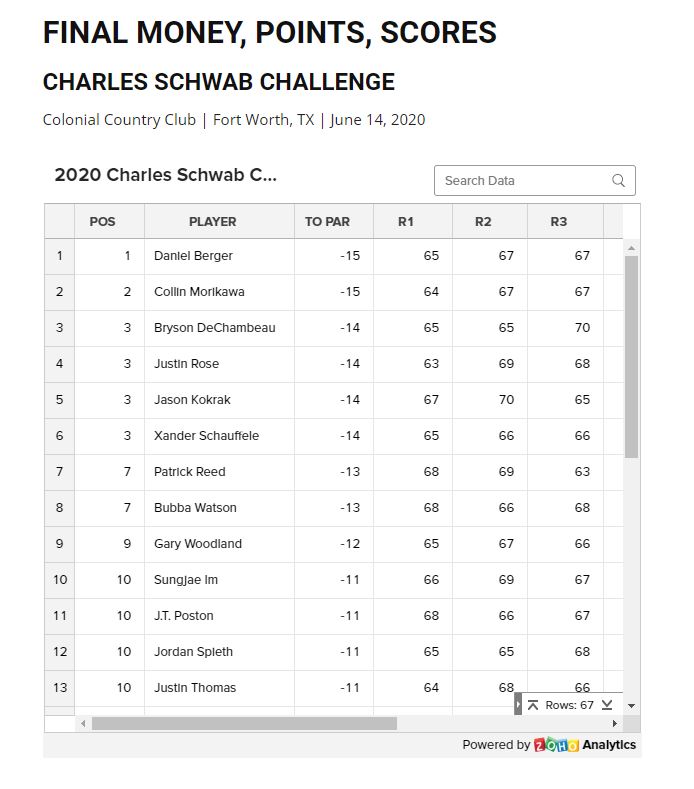 Rory McIlroy, No. 1 in the world rankings, was 5-over the first six holes on the way to a closing 74 for 274 and a six-way tie for 32nd that included No. 4 Brooks Koepka (69). McIlroy, the 2019 PGA Tour Player of the Year and FedExCup champion, had finished in the top five in seven consecutive PGA Tour starts since a tie for sixth in the 2019 BMW Championship.

But they were all also-rans to Berger, who got to don the tournament’s famed plaid winner’s jacket, received a belt buckle befitting Fort Worth’s motto as “Where the West Begins,” the 42-inch, 55-pound Leonard Trophy and a check for $1,350,000 as a few people clapped near the clubhouse. Despite the low-key fan response, the victory was especially satisfying for someone who began the week 107th in the rankings and 45th in the FedExCup standings and hadn’t won since the 2017 FedEx St. Jude Classic, which came before a wrist injury that put him on a Major Medical Extension entering this season.

Despite a new environment with virus testing protocols, social distancing and a lack of fans, Berger said he never really felt out of sorts. He rented a house in the neighborhood and could walk to the course. His uncle came to town and cooked his meals, and he didn’t venture out anywhere.

“I thought about the virus very few times this week,” said Berger, who was on the victorious U.S. Presidents Cup team in 2017 before being out nearly five months with the wrist injury. “You know, it’s been such a big part of our lives for the last two months, and I feel like I just tried to do everything I can to be safe, and that’s all you really can do. You wash your hands, you don’t touch your face, you wear a mask when you can, you social distance and obviously we got tested early in the week so I knew I was healthy before I got here.

“We had the temperature readings before we got on-site every single day. I knew that all of the employees and staff that were here were doing the same thing. I felt completely safe.”

Berger’s third PGA Tour victory says he’s healthy again and ready to reclaim some of the territory he had carved out on golf’s landscape before his wrist problems. He lives in Jupiter, Fla., but is also a member at Shelter Harbor Golf Club in Charlestown, R.I.

“I didn’t realize how much I loved the game until I was out with the injury,” said Berger, who vaulted to 11th in the FedExCup standings. “There were so many times today where I could have given it up or let the pressure get to me. But I hung in there and played practically some of the best golf I’ve played the last six years the last five holes.”

After Morikawa’s miss, Berger shook his caddie’s hand, which could be forgiven these days considering the circumstances, and drew a sigh of relief. It had taken awhile to get back in the winner’s circle, and it certainly wasn’t the kind of celebration he expected once he did, but it hardly mattered.

“The atmosphere in my opinion was fantastic, even though there weren’t any fans out there,” Berger said. “You knew that millions of people were watching at home, and that was just enough for me.”

Berger and Morikawa are expected to play in the Travelers Championship, which on Monday got commitments from two more Top-10 players, No. 2 Jon Rahm and No. 9 Webb Simpson. That gives the tournament its best field since Travelers became the title sponsor in 2007, including the top five ranked players and eight of the Top 10: McIlroy, Rahm, Koepka, Thomas, Reed, Simpson, Dustin Johnson and Patrick Cantlay. Other notables in the field are DeChambeau, Rose, Watson, No. 16 Tony Finau and No. 24 Paul Casey. Chez Reavie is the defending champion after ending an 11-year victory drought with a four-stroke victory over Vermont native Keegan Bradley and Zach Sucher.

“We are extremely excited to have everyone in the top five of the world rankings and eight of the top 10 join us this year,” tournament chairman Nathan Grube said. “Jon and Webb have each won multiple times on the PGA Tour and will be tremendous additions to one of our best player fields ever.”

Rahm has three victories on the PGA Tour and six on the European Tour and has had four Top 10 finishes in six starts this season, including second in the Farmers Insurance Open and a tie for third in the World Golf Championships-Mexico Championship. He made the cut in the 2015 Travelers Championship as an amateur after receiving a sponsors’ exemption, finishing tied for 64th, and tied for 25th in 2016.

Simpson won for the sixth time on the PGA Tour in February at the Waste Management Phoenix Open, one of four Top-10 finishes in six starts this season that also includes a second in the RSM Classic. His biggest wins came in the 2012 U.S. Open and 2018 Players Championship, and he has made the cut in eight of nine Travelers Championship appearances, with his best finish a tie for fifth in 2013.