HARTFORD, Conn. – In 52 years in journalism, one of the most stirring and touching stories that I’ve ever written was about D.J. Gregory, especially after watching him play in a Travelers Championship Pro-Am at TPC River Highlands in Cromwell.

Gregory, who was born with cerebral palsy and told he might never walk, has trekked every hole of every course on the PGA Tour with a limp and the aid of a cane for more than a decade. He follows a selected player each week and has walked more than an astonishing 14,000 miles and 42,000 holes since 2008 in support of his Walking for Kids Foundation, raising more than $1 million for children’s charities.

In a surprise ceremony this week, D.J. Gregory was honored for his dedication and inspiration with the PGA Tour’s Courage Award before the start of the Waste Management Phoenix Open in Scottsdale, Ariz. He’s the first non-player to receive the prestigious award, given to a person who, through courage and perseverance, has overcome extraordinary adversity, such as a personal tragedy or debilitating injury or illness, to make a significant and meaningful contribution to the game. Previous recipients were Erik Compton (2013), Jarrod Lyle (2015), Gene Sauers (2017) and Morgan Hoffmann (2020).

Gregory received the award from PGA Tour commissioner Jay Monahan alongside WM officials and No. 1-ranked Jon Rahm, whom Gregory is following this week.

“It’s a total shock and pretty awesome,” Gregory said, fighting back tears. “I’m just so lucky to have been able to meet so many wonderful people who have done so much for me. The golfers are some of my closest friends, and that’s what I take away most. Giving away money and raising the money is awesome, but it’s the friendships for me. It’s the relationships that I hope to continue for many years to come.”

Monahan said Gregory has endeared himself to countless fans, players, staff and tournaments for more than a decade.

“It’s a tremendous example of perseverance and courage,” said Monahan, a native of Belmont, Mass., who graduated from Trinity College in Hartford. “Our players have embraced D.J. over the years and continue to be motivated by his dedication to the Walking For Kids Foundation. We couldn’t be prouder of the impact he has made and the many lives he has touched in a positive way.”

Rahm and 2017 Travelers Championship winner Jordan Spieth are two of the players touched by D.J.

“He’s an inspiration to a lot of people,” said Rahm, whom Gregory followed when he won the 2021 U.S. Open. “He was not dealt the best hand in his life, and he made something wonderful out of it. The fact that he goes out there and walks as much as he does with the difficulty he has to walk, it’s very, very impressive. He’s captured a lot of hearts of us players — definitely mine.”

Spieth said, “More than anything, I’m inspired by him.”

The Courage Award includes a $25,000 contribution by the PGA Tour to a charity of the award recipient’s choice, which was matched by Rahm. Title sponsor WM and the Thunderbirds, the host organization of the Phoenix Open that, like all PGA Tour events, have been strong supporters of Gregory, also matched the $25,000 donation to Walking For Kids.

In late 2009, a year after walking his first season on the PGA Tour, Gregory formed the Walking For Kids Foundation, which allows players and sports fans the opportunity to support children’s charities. Gregory recently surpassed $1 million raised through his foundation, which he has in turn donated to more than 25 children’s charities, including First Tee chapters in Connecticut; Greater Knoxville, Tenn.; Greater Kansas City; Sandhills in Pinehurst, N.C.; Central Carolina in Clemmons, N.C.; and Triangle in Raleigh, N.C.

Gregory was born 10 weeks premature with a congenial disorder affecting movement, muscle tone or posture. Making his life even more challenging was his legs were tangled together at birth and his eyes were crossed. Doctors told his parents that he would probably spend his life in a wheelchair, but by the time he was in first grade, he’d had five surgeries, including one in which his abductor muscles, which help control balance, were cut to untangle his legs. The final operation left both legs broken and in casts, separated by a bar as they healed so they couldn’t cross over again.

For the first five years of his life, Gregory had to “army crawl” between the rooms in his parents’ home. He couldn’t stand upright on his own, couldn’t walk and had six operations on his eyes. At one point, he spent a month and a half in a wheelchair, but once the casts came off, he started doing something the doctors had told his parents he would never do: he walked. First, with a walker. Then, aided by two canes. Finally, now, with just one. 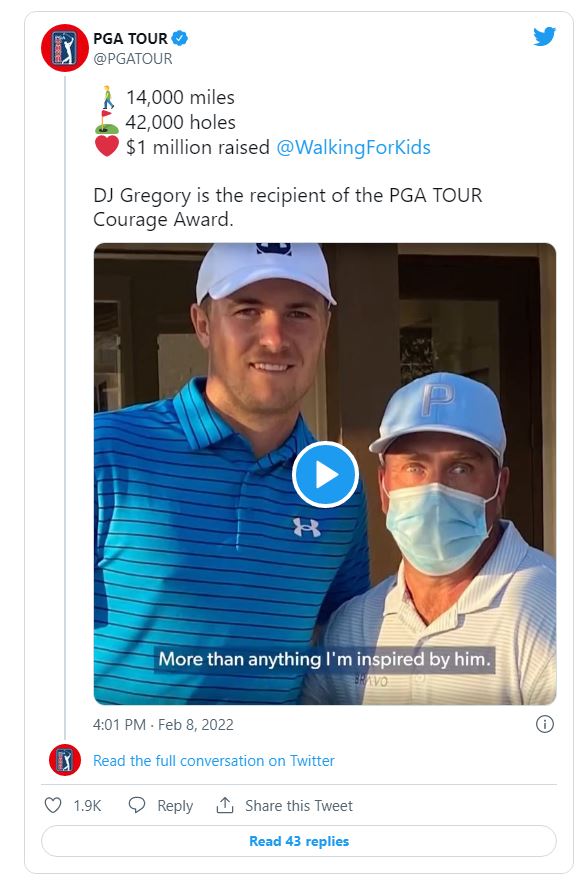 Gregory was always a sports fan and had a special affinity for golf. He began playing the game when he was 9 years old, swinging the club with one hand while steadying himself with the cane in the other. When he was 12, Gregory’s father took him to what is now the Wyndham Championship in Greensboro, N.C. He met the late Ken Venturi on the practice tee at Forest Oaks Country Club, and the longtime CBS announcer invited him to come watch the tournament from the 18th tower.

Venturi introduced Gregory to his CBS colleague, Jim Nantz, and Gregory decided to make a dream come true — travel the country and walk with a different player at each event on the PGA Tour with help from Nantz. By the end of his journey in late 2008, Gregory had walked over 990 miles and 3,256 holes, and Nantz was quoted saying, “It’s going to take an awful lot in golf to be a better story than D.J. Gregory. It is the defining story of 2008. D.J. is sending a message to people about determination and faith and vision and courage. I really believe we’re all eyewitnesses to something that will be a movie someday.”

Gregory, who graduated from Springfield College with two degrees in sports management, has walked an average of 45-48 events each year and has also walked with players on the PGA Tour Champions and the Korn Ferry Tour. The more than 14,000 miles that he has walked on the PGA Tour alone is 60 percent of the way around the globe. The more than 42,000 holes that he has walked in total came with the knowledge that doctors once said he would be confined to a wheelchair his entire life. To put this in perspective, the player with the most holes played on the PGA Tour since 2008 is Charles Howell lll at 24,000.

In his first year on the PGA Tour, Gregory used as many as eight bandages on his feet every round. By the second year, his body adjusted and the need for bandages diminished, but he would still go through nearly seven pairs of shoes each season. Gregory also kept track of his falls over the last 15 years, and he fell 29 times in his first year. The number of falls diminished since then, and he’s proud to have only recorded one in all of 2021, which happened in the final event of the season at The RSM Classic.

D.J. Gregory challenges everyone to take the first step and donate to his foundation at www.walkingforkids.org and on Twitter @walkingforkids. You’ll feel mighty good if you do.