EAST NORWALK, Conn. – A week ago, Chris Fosdick advanced through the Travelers Championship pre-qualifier at Ellington Ridge County, a thrill for any 19-year-old amateur.

But that feat put Fosdick in a serious dilemma. The Travelers Championship open qualifier for the final two spots in Connecticut’s biggest sporting event was Monday, the same day as the 36-hole qualifying for match play in the Connecticut State Golf Association Amateur Championship. Fosdick had reached the State Amateur after an opening 4-over-par 40 on the front nine at his home course, Lyman Orchards Golf Club in Middlefield, but rallied on the back side with a 4-under 32 that enabled him to share medalist honors.

So after weighing the pros and cons of trying to play in his first PGA Tour event or compete in the biggest amateur tournament in the state, Fosdick opted to head to Shorehaven Golf Club instead of making a second appearance at Ellington Ridge CC in hopes of improving his amateur status.

“It was an extremely difficult decision,” Fosdick said.

It certainly proved to be the right decision as Fosdick made what is believed to the biggest comeback in 118 State Amateur finals, rallying from 5-down after 16 holes June 25 to beat former pro and 2013 champion Cody Paladino 1 up in the 36-hole title match. Fosdick made an eagle and six birdies, including four in a row on Nos. 9-12, in shooting an 8-under 63, one off the course record, in the afternoon round. He and Paladino, who had 67, combined to shoot 11 under for the first 12 holes best-ball in a phenomenal display of golf that players in the Travelers Championship would have had a hard time duplicating.

“It’s the best match that I’ve ever been part of,” said Fosdick, who qualified 21st for match play and reached the final with a 2-up victory over medalist Bradford Tilley, another former pro who won three New York Mid-Amateur championships in 10 days last fall. “When you’re 5-down, it’s hard not to feel down, but I knew there were still 20 holes to play, so I just tried to hang in there. And I tried to stay below the hole because I thought I could go low if I did, and I went really low.”

Fosdick actually started his comeback when he parred the 17th hole and made 25-foot birdie putt at No. 18 to get within 3-down at the lunch break.

“Making that 25-footer gave me a lot of momentum,” Fosdick said. “I knew I was still in it.”

Fosdick got back to 1-down when Paladino failed to get up-and-down from a bunker at No. 5 and then began to take control with a 10-foot birdie putt at No. 9. He also birdied the next three holes, with Paladino making a matching 4 at the 12th. Fosdick extended his lead to 3-up when Paladino lipped out a 4-foot par putt at the 13th hole. But Paladino made a deft bunker shot to 2 feet after nearly driving the green on the 335-yard, par-4 14th hole and then hit a 2-iron cleek shot from 230 yards on the par-5 16th to 15 feet, setting up an eagle. It was the second time in the afternoon that someone made a birdie and lost the hole to an eagle.

Paladino missed birdie bids of 10 and 25 feet on the last two holes, and Fosdick made routine pars, missing 12-foot birdie putt at No. 18 that would have given him a share of the course record. But he had hit a 122-yard wedge shot from a fairway bunker to set up a possible closing birdie that he called his best shot of the day.

Moments later, Fosdick was celebrating with several junior golf foes, two of whom played in the championship, and Mike Kohs, his former coach at Xavier High School in Middletown. Kohs had watched Fosdick win the first Connecticut High School Open Championship in 2018 before he became an All-American as a freshman at Division II Florida Southern this year. But Fosdick decided to transfer for more of a challenge at the University of Virginia, where CSGA executive director Mike Moraghan was the men’s golf coach for 15 years.

“I really wanted to get into a solid program where the players really play off each other,” said Fosdick, a member at Wallingford Country Club. “And the Atlantic Coast Conference is really strong, so that will give me a lot of great competition and shape me more for professional golf.”

In two years, Fosdick will be joined by close friend Ben James, a 17-year-old who will be a junior at Hamden Hall County Day and edged Fosdick for the individual title as Connecticut won the team competition in the New England Junior Championship the past two years. The duo played together on the CSGA Tri-State Team last year, and James, considered by many as the best male junior player in Connecticut golf history, also finished third in the Connecticut Open and won two of three matches as the U.S. Junior Presidents Cup Team beat the International side in December in Melbourne, Australia. He bogeyed the 18th hole to lose to Paladino in the quarterfinals. 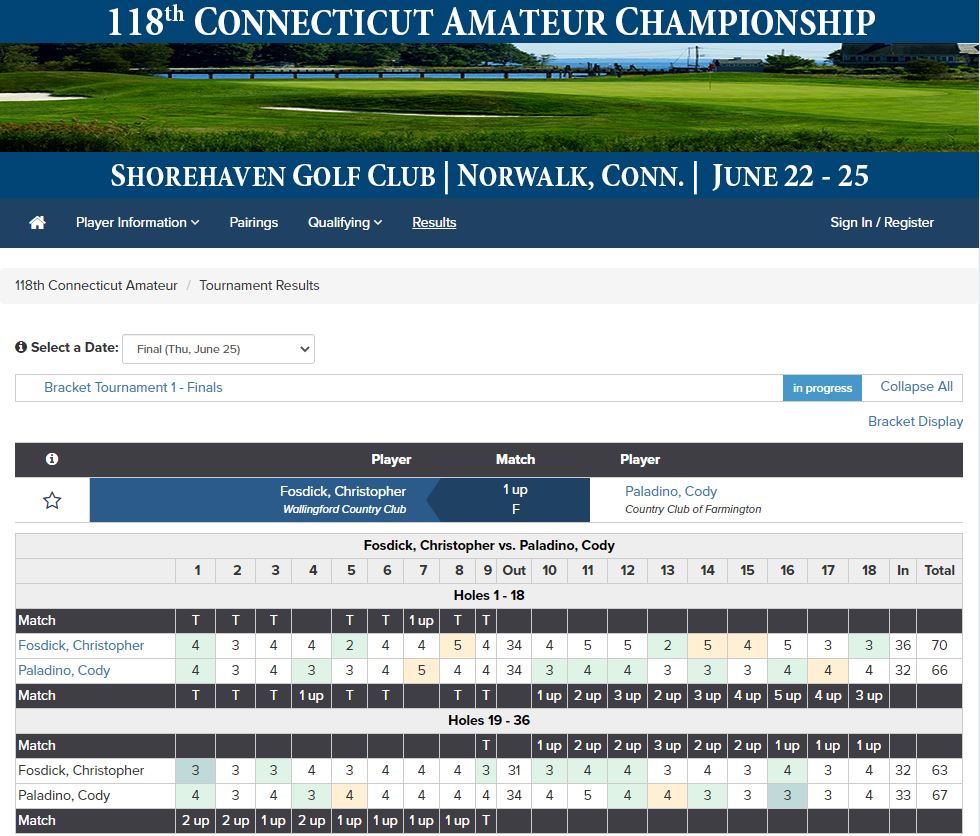 Paladino, 31, became a reinstated amateur in April after spending five years pursuing a professional career on four tours on four continents and playing in 32 countries, including such golfing outposts as China, Malaysia, Thailand, Columbia, Chile, Ecuador and Paraguay.

“It was a very tough decision, excruciatingly tough,” Paladino said of ending his pro career. “But over time, the travel, the pressure, constantly being concerned about finances, it takes a toll. And as time went on, the related stress and strain wears on you. ‘Why haven’t I made it?’ You’re feeling so unstable about your life. Does that affect what’s happening on the course? I don’t know. But I know it’s hard to separate the two. And in the end, I knew there were other things I wanted to do with my life.”

After talking to close friends and relatives, including some of the Wethersfield Country Club members who had supported his LLC, Paladino joined boyhood friend Kevin Josephson, another good amateur player, at Lyle Health, a new health industry placement company in Farmington where is the Director of Surgical Services. He is engaged to be married to fiancé Anna Pfau, a commercial real estate financial officer, in October. Paladino’s gallery included Pfau, his mother Cindy, older brother Brent and Chuck Lasher, his coach for 15 years. Brent Paladino, an accomplished player who formerly worked at the CSGA, is now the senior director of championship administration for the U.S. Golf Association.

They all suffered through the ups and downs of the day in which Paladino most bemoaned missing a 10-foot birdie putt on the penultimate hole.

“That’s one that I really wanted because it would have squared the match and might have made for a different story,” Paladino said.

As expected, Paladino had mixed feelings about losing in the final of his return to amateur golf.

“It’s hard to take away with what I did for the week right now, but of course, I’m disappointed,” said Paladino, runner-up to Tommy McDonagh in the 2006 State Amateur and winner of the 2015 Connecticut Open. “I played great for a while, then got kind of stagnant and let Chris back into the match and then played good in the afternoon. I felt I controlled my emotions well and never thought about losing a 5-up lead because you know there are going to be changes in a match.

“You just have to give Chris all the credit in the world. He played exceptional in coming back, just spectacular, just outstanding. I love competing and testing myself and hope to meet Chris somewhere in the future.”

If that happens, the duo will be hard-pressed to equal the expertise and brilliance that they demonstrated in the finals match!