GROTON, Conn. – The third time proved to be the charm for Charlie Blanchard in the Connecticut Senior Open.

A day after shooting his competitive low round and tying the course record to share the first-round lead, Blanchard birdied four of the first seven holes to open a five-stroke advantage and cruised to a two-shot victory over Kirk Hanefeld at Shennecossett Golf Course.

“I hit some good shots starting out and got a nice lead,” said Blanchard, who finished fifth and second in his previous tournament starts. “Then I was just trying not to do something stupid.”

Blanchard, the men’s golf coach at Bryant College from Warwick, R.I., notched his first professional win with a closing 3-under-par 68 for a 36-hole total of 9-under 133. Blanchard received the $4,000 first prize and Bill Fox Trophy, named after the golf professional who started the tournament in 1983 as a friendly 18-hole get-together that now has a 156-man field.

Blanchard, who plays out of Wannamoisett CC in Rumford, R.I., joined Ralph Salito (2007) as the only lefthanders to win in the 39-year history of the tournament. He finished with 11 birdies and only two bogeys to add this title to multitude of others, including the Rhode Island Amateur Championship in 2002, when he swept all five of Rhode Island’s major championships and was recognized as the New England Golf Journal New England Player of the Year. 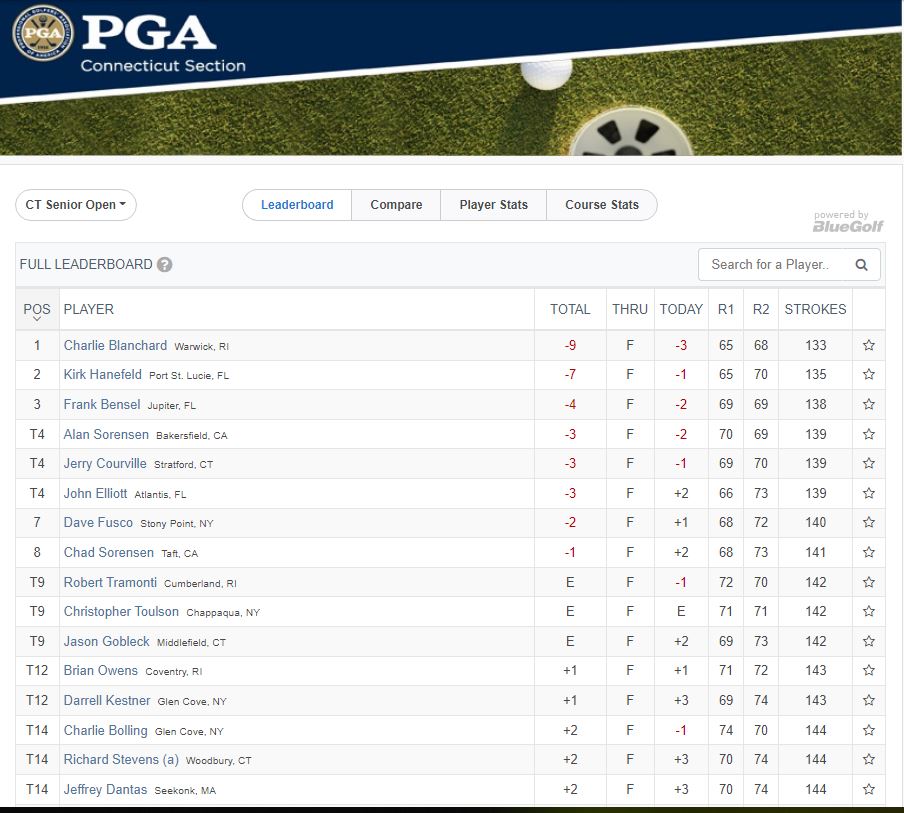 But Blanchard now focuses on improving on being the most successful player in Rhode Island Golf Association history in the 21st century, having won Player of the Year an unprecedented seven times. He has been inducted into three Hall of Fames and played in the prestigious Northeast Amateur on his home course 18 games.

But the Shennecossett links has understandably become one of his favorite courses.

“It really sets up for my game,” Blanchard said. “I hit it fairly long, which gives me a lot of wedge shots, the strong part of my game.”

Blanchard, who began the day tied with Hanefeld, hit wedge approaches to 10 and 12 feet on the first two holes to set up birdies and take a lead that he never relinquished. He chipped to 2 feet for birdie at the par-5 fifth hole and then sank a 40-foot putt to cap his early birdie binge and open a five-stroke advantage on Hanefeld, who opened with six pars and a bogey at the fourth hole.

Kirk Hanefeld, 65, who shot his age for the first time in the first round, got within two when he birdied the eighth, ninth and 12th holes. But he missed three good birdie chances down stretch and couldn’t get up-and-down to save par at the tough par-3 15th hole.

“Charlie got off to a great start and then certainly gave us an opportunity to catch him,” said Hanefeld, who finished in the top five in his previous two tournament appearances. “But I just couldn’t do it, which wasn’t the first time and won’t be the last. But I shot my age for the first time, which was kind of neat.”

Hanefeld’s numerous achievements include winning the New Hampshire Junior Championship in 1971-73, the N.H. Amateur in 1974 and 1976 and the New England Amateur in 1977. He played on the University of Houston golf team from 1974-77, and after turning pro, he captured five State Opens. He also played in three PGA Tour majors and 26 PGA Tour Champions majors among his 71 starts on the 50-and-over circuit. He was the director of golf at four notable clubs in New England and was named the New England PGA Player of the Year twice and the National PGA Player of the Year once. The NHGA Junior Player of the Year Award is named after Hanefeld for his numerous accomplishments in the Granite State.

John Elliott, 57, an All-American at Central Connecticut State University who played on the PGA Tour and Nationwide (now Korn Ferry) Tour, was one stroke back starting out after making seven birdies and an eagle in an opening 66. The 2017 champion birdied the fifth hole to get to 6 under and tied for second with Hanefeld but bogeyed No. 8, 9 and 10 to fall out of contention.

“I played good for six holes and had 5-iron into the (par-5) eighth hole but hit a terrible shot and then three-putted being too aggressive,” Elliott said. “Then the two other bogeys kind of turned the day around. I drove the ball perfect, but my irons were off. I just couldn’t get my distances down.”

Elliott did have memorable ending to his day, holing a 50-foot chip on No. 18 for birdie 4 /and 73, which got him a tie for fourth at 139 with Jerry Courville of Stratford (70) and Alan Sorensen of Bakersfield, Calif. (69). Frank Bensel of Jupiter, Fla., who will shoot for a record-tying fourth Connecticut Open title on July 26-28 at the Country Club of Darien, birdied the 15th and 16th holes to shoot a second 69 and finish third.

Dick Stevens of Woodbury was the low amateur after shooting 74 for 144 and tie for 14th. Two-time Connecticut Open champion Jim Becker, who became the first three-time Connecticut Senior Open titlist when the event was last played in 2019, shot 147 to tie for 26th at 147.

The tournament, played for the 24th consecutive year at the Donald Ross redesigned course, had a $30,000 pro purse and was sponsored by Mohegan Sun and the PGA Tour’s Korn Ferry Tour. The 2022 tournament will be played again at Shennecossett on July 11-12.