HARTFORD, Conn. – South Windsor native Rob Corcoran came within a 10-foot birdie putt on the final hole of winning the biggest tournament of his life.

But Corcoran’s miss at the end of regulation gave Bob Sowards a shot at his 10th PGA Tournament Series title, and the head pro at Kinsale Golf & Fitness Club in Powell, Ohio, sank a 20-foot birdie putt on the first playoff hole to capture Event No. 6 on Friday at PGA Golf Club in Port St. Lucie, Fla.

It capped off a memorable week for Sowards, who won the Indian River Grapefruit Pro-Am in Vero Beach, Fla., on Sunday and lost Event No. 5 in a four-way playoff on Tuesday before prevailing on Friday.

“I like this playoff a lot better than the last one,” said Sowards, who shot a closing 5-under-par 67 in windy conditions to finish 36 holes at 8-under 136. “I got lucky with the last putt. I just assumed we were going to No. 2, but it’s tough to make putts when it’s windy.”
After Sowards made his 20-foot putt, Corcoran missed from 8 feet in his bid to extend the playoff.

“Ten (wins) is a nice, solid round number, a little better than nine,” Sowards said. “It’s always hard to win because these guys are so good down here.”

Corcoran shot a bogey-free 68 but failed to birdie the par-5 17th hole that was playing downwind. 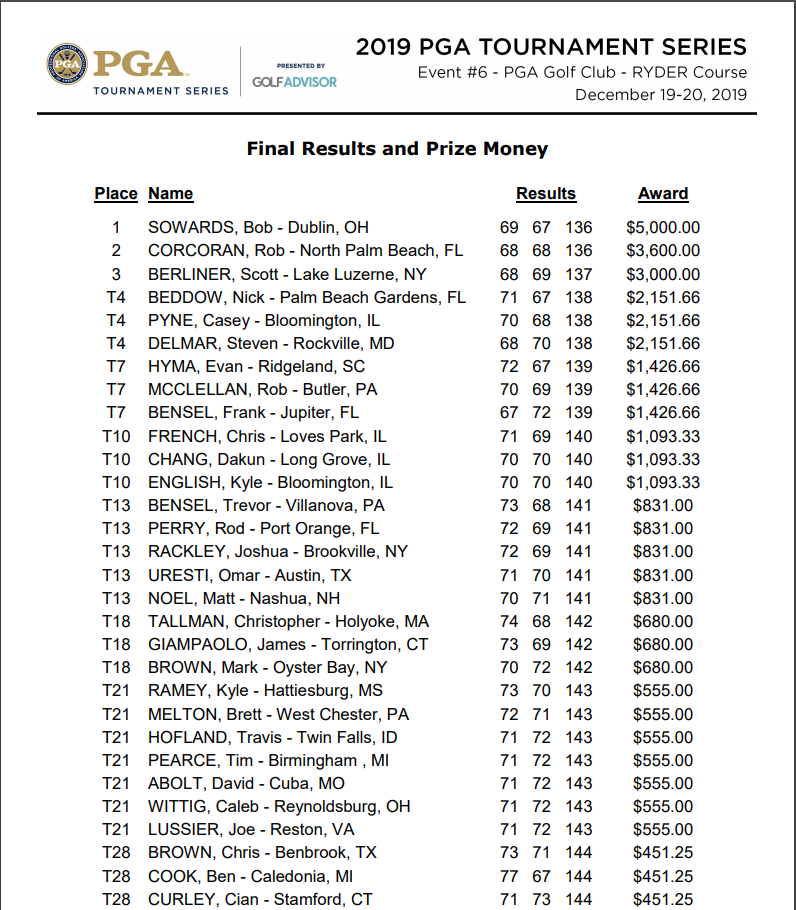 “I played great,” said Corcoran, 43, who grew up playing at Ellington Ridge Country Club and is now a teaching pro at Poxabogue Golf Center in Sagaponack, N.Y. “I had a putt on the last hole to win and knew where I stood. Unfortunately, it didn’t go down. (But) Bob is the best player down here. Every time I get paired with him I love it because I learn from him. All of us are lucky to get a pairing when we get to match play.”

First-round leader Frank Bensel, a three-time Connecticut Open champion and the assistant pro at Century Country Club in Purchase, N.Y., closed with 72 to tie for seventh at 139. James Giampaolo of Torrington shot 142 to tie for 18th, and Cian Curley of Stamford tied for 28th at 144.

Bensel and Dylan Newman of Greenwich lost in a four-way playoff in Event No. 5 on the Wanamaker Course at PGA Golf Club in Port St. Lucie, Fla. Bensel bogeyed the first playoff hole after doing likewise on the final hole of regulation when he missed a 12-foot par putt after hitting his drive in a penalty area in his bid for a second Series victory this month. Instead, he closed with an even-par 72 for a 36-hole total of 137 to finish in a tie with Newman, Sowards and Australian Mick Smith.

Earlier this year, Bensel, who lives in Jupiter, Fla., in the winter, won the Westchester (N.Y.) Open at the Country Club of Darien in June in a playoff with longtime friend Greg Bisconti. He later finished second to Scott Herbert in the Senior PGA Professional Championship at Omni Barton Creek Resort and Spa in Austin, Texas.

Smith shot 70, parred the fourth playoff hole and had his first Series victory in only his fourth start when Sowards’ par putt lipped out. Smith made a 35-foot birdie putt on the 17th hole and then parred No. 18 and the first four playoff holes to win the $5,000 first prize.

Sowards, a four-time winner of the PGA Professional Player of the Year Award from Dublin, Ohio, and Newman also closed with 70. Bensel, Sowards and Newman each earned $3,045.
Newman, 28, the assistant pro at Brae Burn CC in Purchase, N.Y., was 4-under on the front nine to take the lead, but he four-putted the 14th hole for a double bogey. Newman, who won the first two Series events this month, bogeyed the third playoff hole but still clinched the Series money title with $16,070, easily outdistancing runner-up Joshua Rackley of Brookville, N.Y. ($10,608).
“It’s nice to win the money title,” Newman said.