FORT MYERS, Florida – No other sport has more feel-good, heart-warming stories than golf and the remarkable tale of Bob Gunthner is exceptional and it’s about one of golf’s most sought-after feats.

Avid golfers, those who play 25 regulation rounds or more in a year, share four basic goals: (1) Shoot a sub-par round (2) Make a hole-in-one (3) Eagle a par 5 (4) Shoot your age. If you’ve achieved the unofficial “grand slam” then you’re reached golf’s elite status, since most of us dream of magnificence on the golf course.

He’ll play golf that day and probably shoot 85 or lower, because over the past 18 years he’s shot his age or lower over a thousand times. That’s not a typo – 1,000 times! On Monday November 18, he posted 77, a whopping seven strokes under his age.

When we first met, I naively asked Bob “So you must post about 150 rounds a year?” His answer is one I forever cherish, “Last year I posted 244 rounds, but please don’t tell anyone.”

Sorry Bob, I’m terrible at keeping secrets, and I classify anyone who posts 244 rounds in a year as a super-avid-golfer! In fact, someday they should open a Golf Hall of Fame to honor the 200-plus crowd. But Florida and many Sunbelt states are full of super-avid-golfers who play in excess of 200 rounds annually.

As he’s done for the better part of 20 years, Bob will tee it up at 8 a.m. at Fiddlesticks Country Club, a private, gated, golf community with two courses – the Long Mean and Loch Ness – with his group of golf buddies called the Clansmen and G-Men. The group ranges from six players to 26, and they aim to play all 365 days of the calendar year, as the club, the weather and health issues permit.

Is playing golf six days a week extraordinary? Not for Bob Gunthner and his Fiddlesticks cronies.

I first met Bob Gunthner four years ago when at age 81 he shot a smooth 78 from the member tees. I shot an ugly 88. Remember it well since he collected a few dollars. But it wasn’t the fact that I lost $6 that dumbfounded me. We played a few more rounds together and he proceeded to pump out an 81, 79, 80 and 81.

I thought “Wow, this guy is steady,” not aware that he was 81 years old and had just shot his age or better five consecutive days. I’ve been around the game my whole life but never met anyone who shot his age or lower almost every time he tees it up. Impressive, for sure!

He’s never won a major championship, never been featured on Golf Channel or in Golf Digest or in Guinness Book of World Records (yet) but I know my new golf hero: Bob Gunthner.

“I love to play golf,” he said only a few days shy of birthday number 85. “And I don’t think too much about my age except on those days when my body sends signals like a tender elbow or sore knee or ankle. I’m sure there are other golfers who shoot their age all the time but I stopped keeping track. It’s over a thousand.” 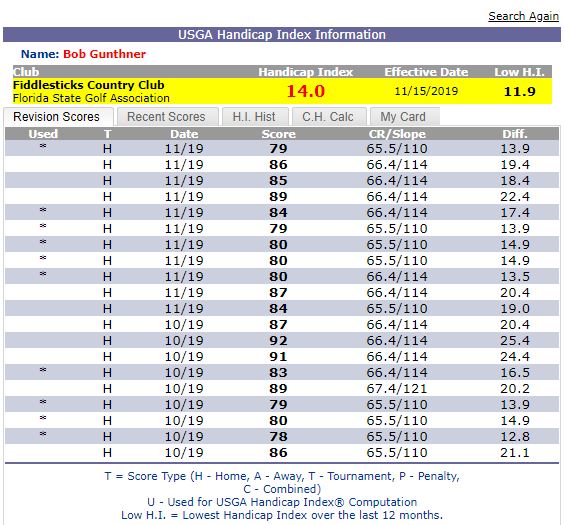 “Bob was a great athlete when he was young and I think that’s why he can play five-or-six days a week at age 84,” said Psiris about his friend of 20 years. “When Bob first moved to Fiddlesticks the former golf pro called him ‘the oldest teenager at Fiddlesticks’ because he used to roller skate and have a fun time in everything he did. Many years ago, I played with Bob when he shot 68 on both courses in the same week. Now his handicap is 14 and we tell him his game is all washed up.”