PALM HARBOR, Florida – It’s been a record breaking week in many ways here at Innisbrook Resort, home to the PGA Tour’s Florida Swing fourth and final course at the 2022 Valspar Championship, contested on the challenging par-71, 7,340-yard Copperhead Course, which will pay $1,404,000 to the winner from a purse of $6.9 million.

The first three rounds were played in nearly perfect conditions. The weather played little or no factor and course conditions were excellent considering the previous rainy weather last week in the Tampa area and most of Florida. The crowds are back after being not invited to the 2020 competition and smaller last year. According to sources, this year more corporate tents were sod out and constructed maybe in tournament history dating back over 20 years.

The score low and a few players mentioned that they found the greens to be unexpectedly soft which caused a number of their approach shots to come up short.

“These greens are very tough to read to where the grain is very subtle and it goes a lot of different ways,” Justin Thomas commented after round one. “They do a great job with the pin positions of kind of putting them on little subtle spots that maybe stop breaking when they get to the hole or whatever. And man, I hit a lot of really, really good, I mean, probably five, six, seven putts today felt like that easily could have gone in that didn’t.”

Since this event is my rookie golf writing assignment it’s clear to me that writing about golfers and tournaments is a much different skill set than reviewing golf courses. There’s little time between watching a round and writing a story for publication on deadline. Actually, it’s a race. My hat is off to all of you who have mastered this skill. 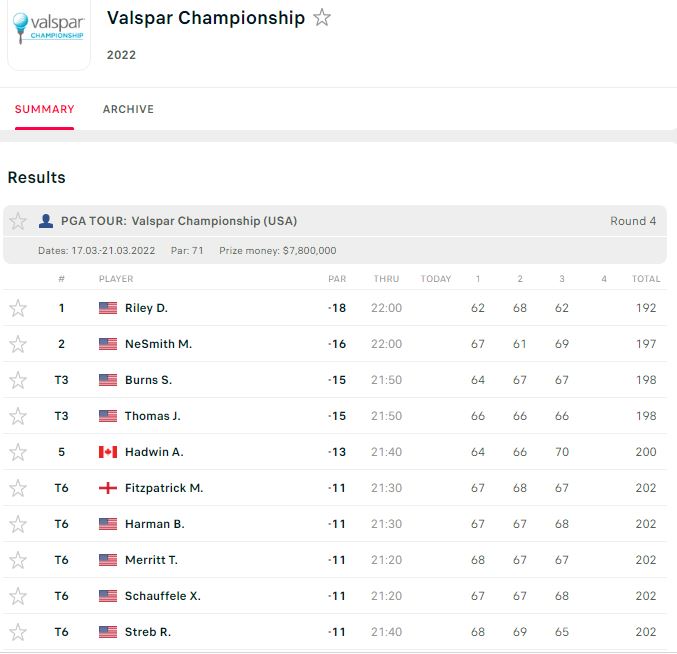 These are the current standings at the PGA Valspar Golf. Let’s take a look at how we got here.

All five of this world ranked golfers made the -2 cut.

Justin Thomas and Xander Schauffele are currently in the top ten. Viktor Hovland is -6 and T34, <strong>Dustin Johnson is -3 and T62, Collin Morikawa is -1 and T6.

Riley’s birdie on the ninth hole never touched the fairway or the green. Drive was in the trees on the right side of the fairway. Approach shot landed in the front right bunker. Bunker shot from 69-feet hit high into the air and landed directly into the cup for a birdie.

Tied the course record with his 61 in the first round. He had eight birdies and one eagle on the 14th hole. Missed a birdie putt on eighteen my less than an inch.
Play the front nine in round three at -4 which at one point gave him a four shot lead.
Had four bogeys on the back nine with two coming back to back on 16/17 in the “Snake Pit.”

Justin Thomas and Sam Burns will be playing together in the fourth round. Thomas has shot 66’s in all three rounds. Burns shot a first-round 64 then 67’s in rounds two and three. Both of these players will be directly in front of the final pairing of Riley/NeSmith. It will be interesting to see what will happen if both Thomas and Burns start out the front nine posting low scores. Stay tune. I think we’re in for an exciting final round …