CONCORD, Mass – The 2020 New England amateur golf season is filled with plenty of feel-good stories with happy endings, but the feat accomplished by 16-year old John Broderick, a junior at Belmont Hill School, is the undisputed golf story of the year – so far!

The prestigious 91st New England Amateur was contested this year at Concord Country Club July 21-23 with over 100 talented players from throughout the six-state region, but wet conditions shortened the tournament to 54 holes

Massachusett’s Nick Maccario, of Bradford, had played some of the best golf of his career over the last few weeks, but fallen just short of securing major titles both times. 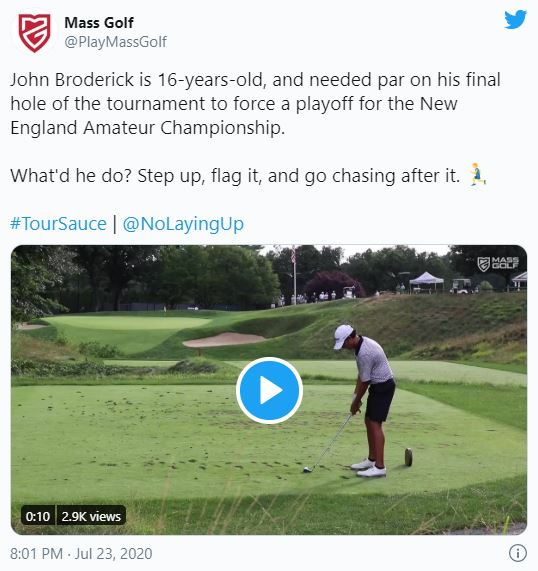 At the Massachusetts Amateur, (a match play event) Maccario, 28, knocked off three past champions including Matt Parziale on his way to the final match at The Kittansett Club. Despite playing the last 12 holes in 3-under — “throwing the book at him,” as he said at the time — Maccario lost the Mass. Amateur final to Matt Organisak on the 36th hole.

At Concord Country Club, Maccario — who won the 2019 Mass. Mid-Am by a whopping 15 shots — posted his second straight 67 to grab the clubhouse lead, only to watch as 36-hole leader John Broderick was still on the course one shot behind with two to play.

“I was more nervous watching John finish than playing,” Maccario told Mass. Golf. “The competition has been so great the last two weeks so it’s easy to get pumped up.” A birdie on No. 17, followed by a par at the last gave 36-hole leader Broderick a share of the lead, as the tournament was shortened to 54-holes due to weather delays in today’s final round.

Broderick, of Dedham Country & Polo Club, after opening with the same score as Maccario (a 2-over 72), bounced back to post the low round of the tournament on Wednesday, a 65. During that magical round, the 16-year-old from Wellesley carded seven birdies, including four out of five from Hole Nos. 13-17 to take two stroke leading into the final round, which was scheduled to be a full 36-holes.

After winning in extra holes, the young Broderick may have handed Maccario his second straight defeat, but nobody will argue that the Merrimack Valley resident is one of the elite players in the state. As for Broderick, he no doubt has collegiate golf in his future.

“It was unbelievable and crazy,” said Broderick, a junior at Belmont Hill School in an interview with the Mass. Golf Association. “It really shows that I’m at that level now,” he continued. ” I really improved so much in the last year. At the start of the year, I wasn’t really playing my best. I played the GolfWeek Junior Open last week and I really found something in my swing. Coming into this tournament, I felt really great. It really shows I can play with these guys and I can beat these guys.”

The New England Amateur, which rotates each year to one of the six states in New England, was played this year at the historic Donald Ross-designed Concord Country Club. The course is located in the same town where the “shot heard round the world” was fired to start the Revolutionary War in 1775. The club’s first nine holes designed by Ross opened for play in 1913, while the club itself dates back to 1895. Mature trees, and fescue-lined fairways give the course a distinctive look, while typically difficult Donald Ross greens make for some interesting pin placements and diabolical putts.

The New England Amateur winner gets their name on the Harry B. McCracken Jr. trophy, and this is the first time the tournament has been played since the legendary golf administrator passed in 2019. For 50 years – more than half of his adult life – the Massachusetts native was a dedicated volunteer to the Massachusetts Golf Association, New England Golf Association and the USGA. McCracken, the 2007 recipient of the USGA’s Joe Dey Award for meritorious service to the game, was a fixture for years at the New England Amateur.

(Content for this report was provided from Mass Golf media.)