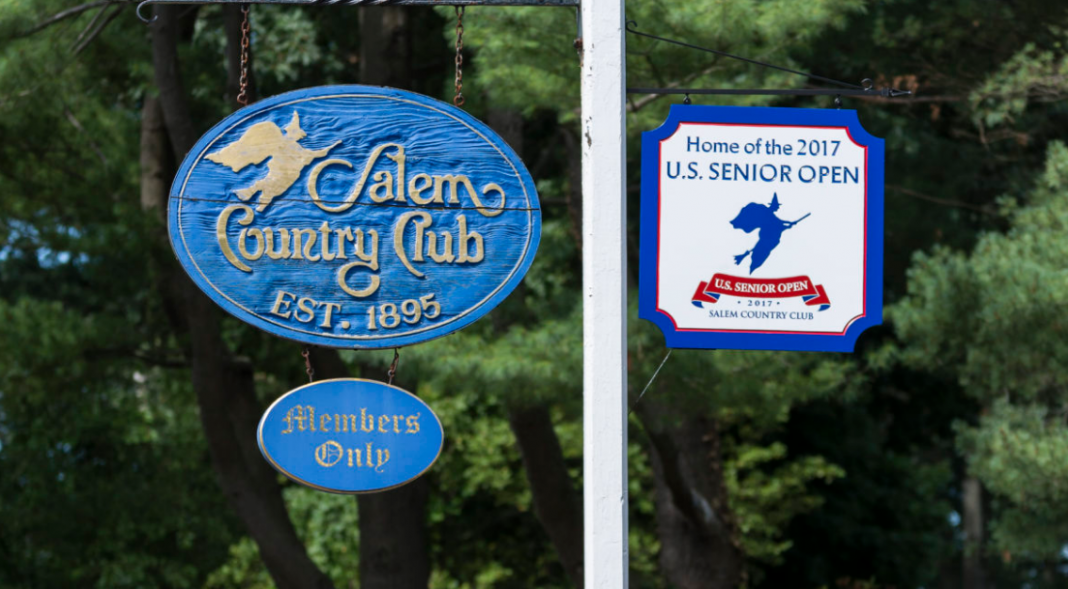 SALEM, MA – Attention sports fans, golf aficionados, slashers, hackers and couch potatoes! You might want to save the dates of June 29 through July 2 for one of New England’s biggest sporting events of the year.

Hint. It has nothing to do with the Patriot’s Super Bowl team, or Celtics quest for championship banner No. 18, or even NASCAR racing in Loudon, New Hampshire. This event has duende, something irresistibly attractive.

Brace yourself New England Golf Nation, because the world’s most talented golfers over age 50, are coming to Salem Country Club the week of June 26 – July 2. They will be competing for 72 grueling holes on the Donald Ross-designed Salem CC course, trying to earn a share of the $4 million purse, in the richest & most cherished tournament on the Senior Tour – the 38th U.S. Senior Open Championship.

Some of the greatest names in golf will compete for the $700,000 first place check and the Francis Ouimet Memorial Trophy. How’s this lineup look? Fred Couples, Bernhard Langer, Tom Watson, Colin Montgomerie, Steve Stricker, Davis Love, John Daly, Vijay Singh, Mark O’Meara, Tom Lehman and many more oldies but goodies. Practice round tickets are only $25 or about the price of two beers at Fenway. Daily tickets are $50 less than the price of parking at Gillette Stadium. Over 120,000 fans are breathlessly (including me) waiting to attend.

“All the pieces that are required to produce a USGA national championship are in place,” said Executive Director Edward Carbone, who brings to the table over 24 years of hard-knock golf experience. “We have partnerships with 100 corporations so far. Salem Country Club will be a devilish and delightful test. I think you can expect par to be a good score, and we have playing commitments from all the best senior players in the world. We are excited and it’s all systems go!”

For those with a good memory, Salem Country Club, hosted the 2001 U.S. Senior Open, won by Bruce Fleisher with a winning score of 1-under par, 269. This is the second time the club will be showcased across the globe as the host site and this marks the sixth USGA event to be played at Salem, including the 1954 U.S. Women’s Open won by Babe Didrikson Zaharias.

The 2001 U.S. Senior Open was a truly epic event,” said William Sheehan III, Chairman, long-time member and former club champion. “You had an amazing field of players in 2001, a welcoming community up here in the North Shore of Boston and we expect this year’s tournament will recreate the magic and memories of 2001.”

“Playing golf in the Boston area has been one of the highlights of my golfing career.”

A field of 156 of the world’s best professional and amateur golfers over age 50 will qualify and compete on the 6,510-yard, par 70 design, founded in 1895. After 36 holes the top 60 and ties will advance. The USGA, with a notorious history of conducting major championships on lightning quick greens and almost ankle-deep rough, confirmed that this tournament will be no different. FOX TV and FS1 will broadcast the tournament to more than 100 countries with 16 hours of live coverage, from golf broadcasters Joe Buck, Paul Azinger and Brad Faxon. Also, 3,000 volunteers are recruited to serve on 30 different committees.

Bruce Fleisher had memories and momentum going for him when he won in June 2001, at the tender age of 52. We spoke to Fleisher by telephone from his home in Palm Beach Gardens as he reminisced about his illustrious golf career, which includes a 1968 US Amateur title, as well as a PGA Tour victory in the 1991 Bank of Boston Classic at Pleasant Valley Country Club, and 18 Senior PGA victories.

“Playing golf in the Boston area has been one of the highlights of my golfing career,” said Fleisher, 68, who has plans to attend this year’s tournament and is also a spokesman for KickX golf. “I remember playing in the final round with Hale Irwin and shooting 69, which was the low round of the day. Jim Colbert was leading the whole day and he needed to par No. 18 to force a playoff. My wife Wendy and I watched from the clubhouse. He hit a drive into the left rough and ended up chopping it out two or three times to make double bogey. It was painful to watch but I ended up winning. It’s a sweet memory and one that I always enjoy talking about. I’m looking forward to coming back to Salem because of the happy memories.”

In the early 2000s Fleisher, Hale Irwin, Gil Morgan and Larry Nelson were the dominant names on the senior tour. Irwin notched 45 Senior Tour wins, while Morgan had 25, and Nelson 19.

“Good course management is everything at Salem Country Club,” said Fleisher, who was first introduced to Dunkin Donuts coffee while in Boston at that time, and today is a daily customer of Dunkin Donuts shops near his home in Palm Beach Gardens. “First, you can’t go firing at pins on any Donald Ross-designed course because the greens are small and fast. And you can’t short-side yourself on missed shots. The week I won in Salem I remember short-siding myself only once and that was the difference. The Senior Tour is a blessing to many players like myself who had spotty careers on the PGA Tour and I was considered a journeyman. It is an extension of something we love to do and we can make a nice living at it.”

For more information on the 2017 U.S. Senior Open visit: 2017USSeniorOpen.com