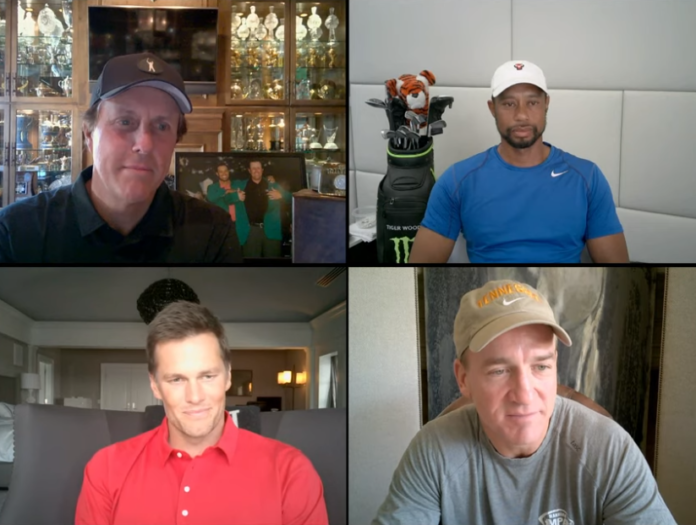 On Thursday, Turner Sports announced that a $10 million donation to coronavirus relief efforts will be part of “The Match: Champions for Charity,” which will be played at the Medalist Golf Club in Hobe Sound, Florida on Sunday, May 24.

Woods will be paired with Manning while Mickelson will team with Brady. The format calls for an 18-hole match that will include nine holes of best ball and nine of modified alternate shot. TNT and TBS will broadcast the event at 3 p.m. ET.

The PGA Tour-approved event will be contested at the famed Florida course without spectators or even caddies. The players will reportedly ride solo in a golf cart.

As part of its promotional efforts, the four sports legends appeared in a web video today, hosted by Ernie Johnson of TNT.

With the PGA Tour on COVID-19 hiatus since March 12 – following the opening round of the Players Championship, the match is expected to act as an appetizer for golf fans and gamblers. The Tour’s revised schedule calls for a restart just two weeks later at famed Colonial Country Club in Forth Worth Texas with the 73rd edition of the Charles Schwab Challenge.

Fundraising beneficiaries will include Direct Relief; the American Red Cross; Save Small Business; and the All In Challenge.