Si Woo Kim won the PLAYERS Championship after posting a final-round 3-under 69 at TPC Sawgrass on Sunday. The 21-year-old South Korean finished at 10-under for the “5th major,” topping co-runner-ups Ian Poulter and Louis Oosthuizen by 3 shots.

It was Kim’s second career PGA Tour win, and with it, he becomes the fourth youngest player in history to win two Tour titles. Only Tiger Woods, Jordan Spieth and Sergio Garcia were younger than Kim.

Before we move on to Texas and the Byron Nelson, let’s look back at the three best shots from THE PLAYERS at TPC Sawgrass. 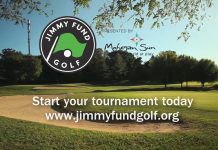 Video: How To Start Your Own Jimmy Fund Golf Tournament