YARMOUTH, Mass – After battling rainy, windy conditions throughout day one at Bayberry Hills Golf Course, the weather broke, and the sun-shined brightly during the final round of the 36-hole stroke play Massachusetts Amateur Public Links Championship August 7.

Fighting off the rest of the field and standing tall was Ryan Riley of Pine Oaks Golf Course. He carded a final round 3-under par 69 to follow up a first round 71 to shoot 4-under par for the tournament, winning by three shots over Sean McReynolds (Braintree GC) and four shots over Jacob Zaranek (Country Club of Greenfield) and

The 38th annual Amateur Public Links Championship is open to amateur golfers who are public course players at Mass Golf member clubs and whose Handicap Index does not exceed 12.0. Players who have playing privileges or who have an established handicap at any private club are ineligible.

This is Ryan Riley’s second Amateur Public Links Championship win, with the first coming ten years ago in 2009, when he was victorious at Franconia Golf Course.

Making the turn in the final round at wonderfully-manicured Bayberry Hills Golf Club, one of the top municipal golf courses on the East Coast, with a 1-under front nine 35, Riley was firmly in the driver’s seat sitting at 2-under for the tournament. Bayberry Hills played to 6,840 yards with a demanding par of 72

He continued to trust his game, as he birdied the par-4 10th hole and par-3 12th. A bogey on No. 14 would drop him back to 3-under. With the tournament all but closed out going into No. 18, Riley made just a little more noise as he finished this year’s event with a birdie, shooting 4-under 140 for the two days.

“I’m finally putting time into it,” said Riley. “I’ve taken off a lot from playing the last few years just because of my kids. My game’s been in good shape, it’s been coming along. It feels great.”

With a son that is almost 14 and daughter who is 12, Riley spends most weekends at a baseball field or basketball court.

“I don’t touch a club on the weekends except for tournaments,” said Riley. “It just feels good.” 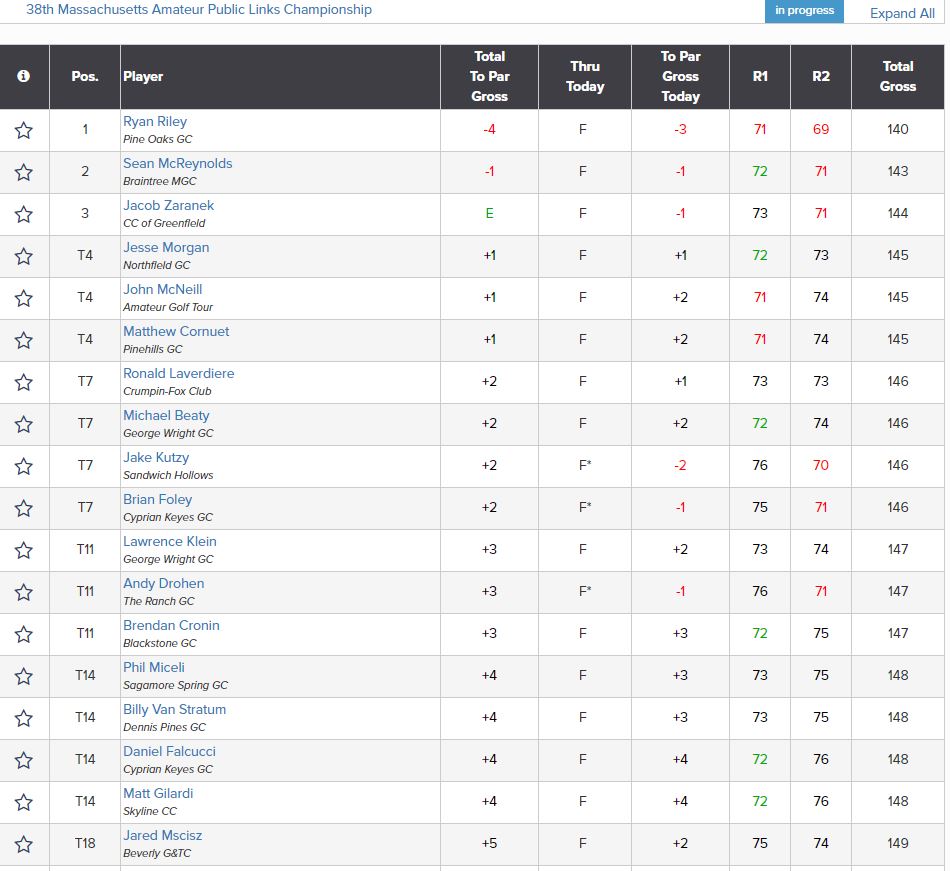 Riley, who sat at three over par through eight holes in round 1, was the beneficiary of a rain delay that allowed him to refocus, and hit a 55-foot putt on nine for birdie to turn at 2-over par.

“I hit a lot of squirrely shots early,” said Riley. “I was just hoping to two-putt that putt on nine to try to get myself going, but I made it. That really got me going.”

“It’s good to just kind of find something and not have to qualify,” said Riley. “It’s just such a grind. The level of competition in the state is just tremendous.”