HARTFORD, Conn. – After sharing the first-round lead, Richard Dowling figured he’d still have to “keep the pedal down” in the 36-hole windup of the Connecticut State Golf Association Russell C. Palmer Cup on Aug. 18.

Dowling, a two-time winner of the CSGA Amateur Championship, proved to be quite the prognosticator at the Country Club of Waterbury.

A second-round 2-under-par 67 kept Dowling within a stroke of the lead and he closed in championship fashion, birdying four of the first eight holes on the back nine of the final round to break from a plethora of challengers. His 4-under 30 down the stretch gave Dowling a closing 68 for a 54-hole total of 6-under 201 and a three-stroke victory over reigning State Amateur champion Chris Fosdick and former winners and pros Ben Day and Cody Paladino.

Dowling, of the Golf Performance Center, trailed Day by a stroke entering the final round and was three back after making a double bogey on No. 4 and a bogey at No. 5 in a 3-over 38 on the front nine.

“I caught a jumper on 4, and you don’t want to be there (behind the green),” said Dowling, whose father Richard caddied for him as he did in his son’s 2019 State Amateur victory. “On 5, I had 198 (yards) against the wind and had to kill a 4-iron and just got way out in front of it. But I knew that I had to be patient and try to be positive. If you plot your way along on this course, you can make good shots and make putts. After I didn’t birdie (the short par-5) ninth, I knew I had to turn it on.”

Dowling did exactly that, starting with a birdie 3 at the uphill 10th hole.

“The birdie on 10 was huge, and I thought, ‘I’m still in it,’ ” Dowling said. “I looked at the leaderboard and guys were going up and down.” 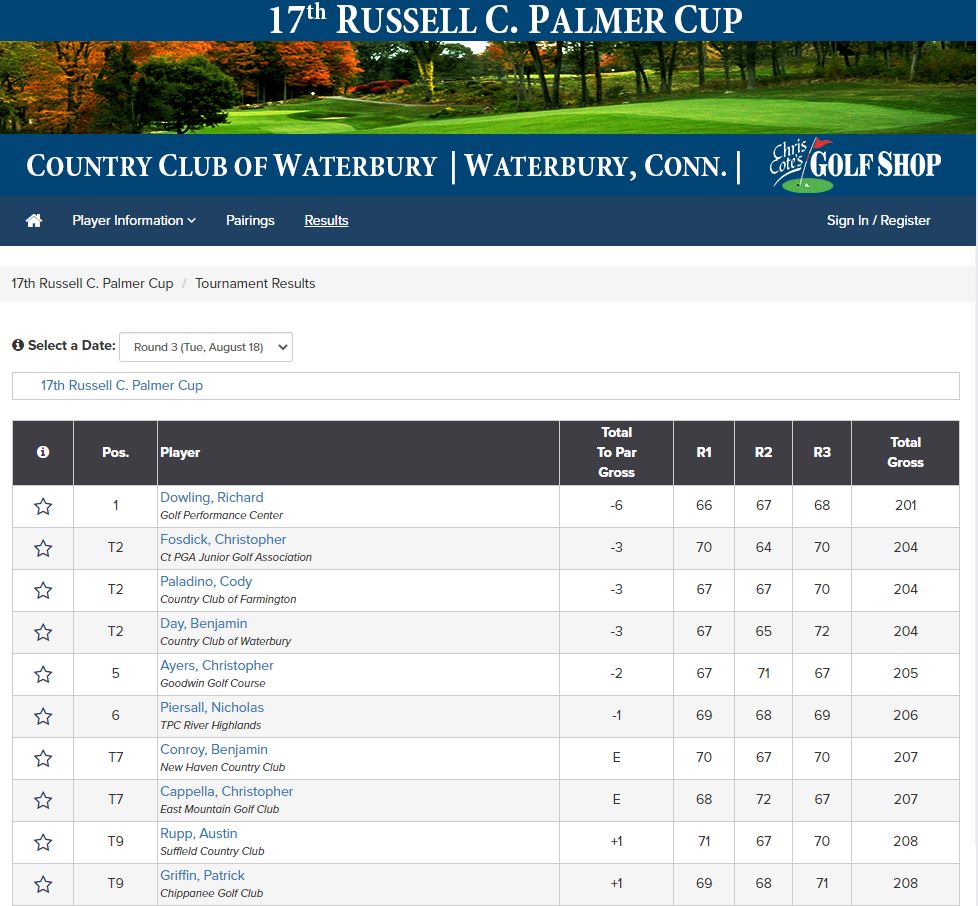 Dowling said he checked the leaderboard on his phone once on the back nine after his tee shot on the difficult par-3 12th hole, which he birdied. He also birdied the par-4 13th hole and made a long downhill birdie putt on No. 17, where he suddenly had a three-stroke lead after Day made a double-bogey 6. Paladino then bogeyed the 18th hole.

After a drive into the right rough at the 18th hole, Dowling hit a deft punch approach shot that set up a closing par and the victory.

“It’s so cool,” said Dowling, the State Amateur champion in 2017 and 2019. “I mean all the things that Mr. Palmer did for the CSGA and the State of Connecticut golf, it is cool to win his trophy.”

It was a tough loss for Day, the 2015 champion from the host club who led after opening with 67 and 65 but lost his bid when he hit drives out of bounds on the way to double-bogey 6s on the 11th and 17th holes in a closing 72.

“It was really 11 and 17,” said Day, who trailed by only a stroke starting the penultimate hole. “Two bad swings. It’s disappointing. I felt like I was playing well enough to get it down and … just two bad swings.”

Paladino, the 2013 champion from the Country Club of Farmington who became a reinstated amateur in March, shot 67 in the first two rounds but closed with 70, which began with two bogeys and ended with a third. Paladino previously won this tournament, the Connecticut Open and the State Amateur, where he lost to Fosdick on the final hole in June in his second event after becoming a reinstated amateur in April.

“I burned a few edges coming in, but I really didn’t hit it close enough,” Paladino said. “Twenty-five, 30 feet, you’re just not going to make many of those. I wasn’t sharp in the final round.”

But it looked as if it might be Paladino’s day after he made a miraculous par at the 12th hole, where his tee shot hit a sprinkler head left of the green and bounced 15 yards into deep fescue even farther left. He pumped his fist when his up-and-down save attempt went in.

“I thought, OK, maybe this is it,” Paladino said.

But he didn’t make a birdie on the back nine and closed with the bogey.

Fosdick opened with 70 but got into contention when he birdied four of the last 11 holes in a second-round 64, the low round of the tournament. But after carding an even-par 34 on the front nine in the final round, he shot 2-over 37 on the back side, seven more than Dowling.

Fosdick said the 8-10 mph wind in the afternoon made it difficult to get shots close and was one reason there weren’t more birdies.

“I wasn’t as accurate with any of my clubs the second time around,” Fosdick said. “What it was doing up there (in the sky) was not what you were feeling down here (on the ground). My goal was to shoot at least 1 under in the afternoon. I thought that might do it.”

Chris Ayers of Goodwin Park GC in Hartford, the 2019 Mid-Amateur titlist and runner-up in the CSGA Public Links Championship last week, finished fifth at 205, one ahead of Nick Piersall of TPC River Highlands in Cromwell. Defending champion Rick Hayes of Silver Spring CC in Ridgefield shot 72 to make the cut on the number on Monday, then closed with 70-72 to tie for 20th.

The tournament is the state’s premier stroke-play championship and named for the late Russell C. Palmer, the CSGA executive director in 1986 to 1995 who was inducted into the Connecticut Golf Hall of Fame in 1997. Palmer’s numerous accomplishments included establishing the use of GHIN throughout CSGA member clubs and initiating the purchase of the Connecticut Golf House, which has served as the home of the CSGA for 30 years.

Scores were much lower than usual because the tournament was postponed from May because of the COVID-19 pandemic. Temperatures were in the 80s with little wind both days, while it often has been in the 50s with gusting winds earlier in the year. In 2019, the cut was 7-over, compared to 2-over this year, and Hayes won at 9-over 216.