Colorado Springs, CO – After turning in 35, Tim Petrovic was sitting at 3-over par through 27 holes of the 2018 U.S. Senior Open, but the 51-year old Glastonbury (CT) native closed with six birdies over his final eight holes on The Broadmoor’s East Course to post a tournament-low 65.

“Yeah, I kind of know him,” joked Petrovic. “Went to school for three years together. We did. University of Hartford. We’re the same age, but he’s a year behind me in school. So we played three years at Hartford.”

After his second day in Colorado Springs, Petrovic, who also won the Connecticut State Amateur in ’86, met with the media and took some questions:

PETROVIC: We’ve got plenty of those stories. But we better talk about golf today. (Laughter).

Everybody’s got their stories, right? Given your background, having to maintain the TOUR card and come through mini-tours, does something like this maybe mean more to you than maybe the rest of the field even?

PETROVIC: I always kid around, I say the book’s coming out some day. If I could tell you where I started and to end up on the PGA TOUR, to play — you’re .5 percent of the one percent of guys that make it on the TOUR and get to play out there for 15 years is such a small number.

And to get out there be able to have the career I did from where I came from, it’s pretty much an up hill climb but I never gave up and I always — I always kind of saw the light at the end of the tunnel.

And I had a break-through year in 2000 and got my card in 2002. I was a late bloomer. I’m a lot different than the other guys. I didn’t get my card until I think I was 34 years old. And then, so it worked out good for me playing 14 years and then I wasn’t 40 years old, wondering what I’m going to do the next 10 years before the Champions Tour. I had two years to wait. It kind of flowed in for me, so that was good. Between college and being 34, was that all mini-tours or other jobs, what did you do?

PETROVIC: Australian Tour, Canadian Tour. Back home. Nike TOUR. Ran out of money. Played 11 events. Sold cell phones. Delivered pizza. Worked at the Y. I could just — it’s unbelievable. I could make a list of stuff — I don’t know why my wife followed me down to Florida.

I guess she must have thought I was going to make it on TOUR. But she quit her job and we moved to Florida in ’93. And it really wasn’t happening for about seven years. What tour were you playing at that point?

PETROVIC: I’d say we’ve got Moonlight Tour. Teardrop Tour. Traveled around. Tommy Armour Tour in Orlando. Didn’t do much of the Hooters Tour. Mostly Tommy Armour Tour in Orlando. And the Golden Bear Tour, they had that was kind of my big break through, played it in ’98, did okay. Had to put up 15 grand. Got someone to put up the money, 15, 20; you played all summer for pretty good purses.

In 2000 I ended up winning the money list on that. I won 160 grand. I thought that I was a billionaire, won 160 grand in minis over the summer, and carried over to the BUY.COM TOUR. Got my card in ’97 and stayed out there until ’02. I think there’s enough there for a book, might be enough there for a book some day. Has something changed in your game? You mentioned being a late bloomer. Did you change something up? Because I know you contended last month. You finished second.

PETROVIC: You know, I’ve been pretty much trying to stay the course. I did do an equipment change this year. I went to Mere, got a nice set of irons made and a nice set of wedges. And Tour Edge hooked me up with some nice hybrids and fairway woods. Pretty much staying with the same stuff. And just trying to stay healthy. Kind of looking the other way now, instead of going having a beer, maybe I’ll go work out or something, now, take care of myself. I think maybe that has something to do with it. 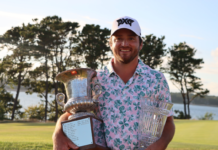