The tears continued to flow as several friends then embraced Peter, who had shot a bogey-free, 4-under-par 66 for a 54-hole total of 7-under 213 and a three-stroke victory over three players. Ballo was finally able to compose himself after becoming the first repeat winner since Nick Cook in 2005-06 at the course where his father, Mike Sr., won his first of two Connecticut Open titles in 1969.

Peter matched his dad’s win total four months after the man and Connecticut Golf Hall of Famer who got he and his brother interested in the game died. Despite Mike Sr. death on April 2, he was very much in Peter’s mind and sight throughout the tournament. Before each round, Peter said a prayer in front of his father’s poster that was among 25 past champions that lined the pathway to the first tee. The chat with dad was especially meaningful for Peter after his first nine holes Monday.

“I was really struggling and lucky to be even par, and as went from the 18th green to the first hole, I said, ‘I need to talk to my dad,’ ” Ballo recalled. “I needed a little help and guidance with my concentration, and that gave me kind of a calming feeling. That was definitely someone else there calming me down and making me feel better. It helped my brain relax and to be happy with whatever happened.”

“On 10, I was happy to finally put my drive in the fairway on a par-5 and have a chance to go for it in two,” Ballo said. “It was a perfect (yardage) and a perfect wind, and I got lucky that it was kind of a standard putt, kind of right edge. It tried to break out of the hole, but it snuck in the right corner and that definitely gave me a big boost. I thought I could have better than 1 under on the front, but that kind of put me in a different gear.

“The 13th hole can be one of the most difficult all week, and I had a hard (yardage) for my approach shot so I kind of chipped a little wedge shot up there. I was tremendously worried about it spinning off the green, and I pulled off the shot that I needed.”

Then Ballo’s short game and a putting tip from his mother, Page, on Tuesday night solidified the victory and $14,000 first prize. He hit a deft chip from the right rough above the 16th green and sank an 8-foot putt for par. Then after hitting his tee shot into a bunker on the par-3 17th, he blasted to 8 feet for another saving par. 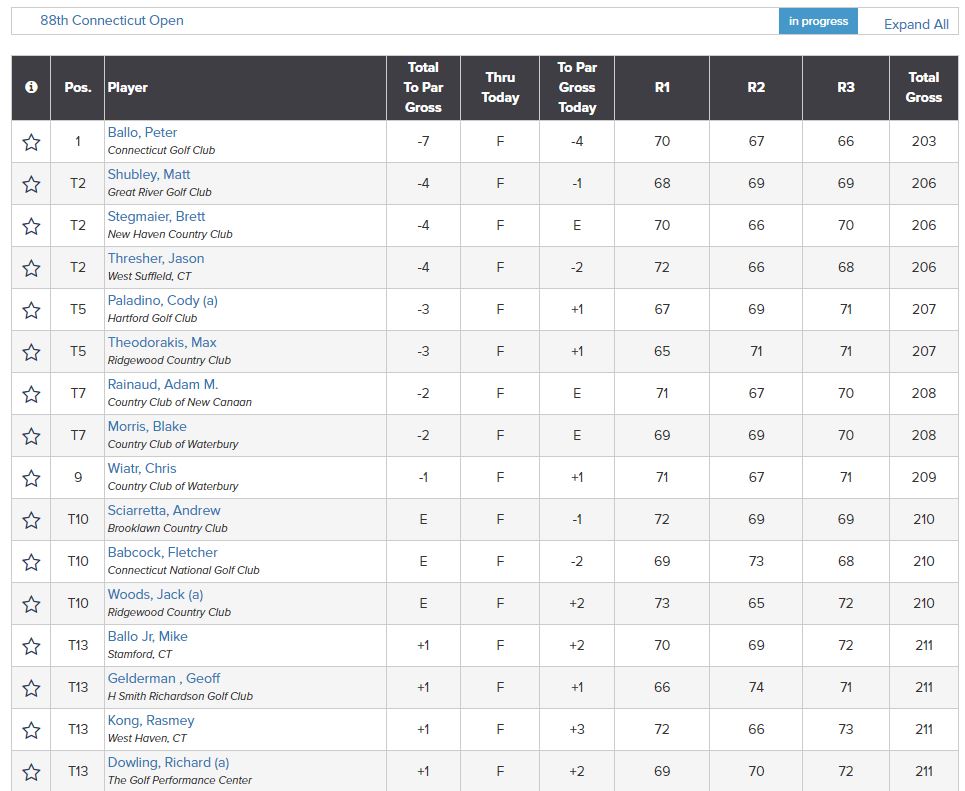 A routine par at the 18th hole made Ballo the 10th repeat champion in the 88th State Open a year after the assistant pro at Connecticut Golf Club in Easton became the first son of a former champion to win.

“This is a lot more than I can explain right now,” said Ballo, who finished second in 2020. “It has been a rough year with the passing of my father and the struggles that I had with my game early in the year, so I really can’t explain how much this means. Winning once[BB1] is tough, but winning twice is very special considering the difficulties that the family has been through. There definitely was someone else there helping me. It took a lot of courage and a lot of support that I have from my friends and family because I’d had a lot of emotions with dad’s passing and struggling with my game.

“In mid-April, I didn’t really like golf, felt really uncomfortable. I was hitting enough good shots that my game was OK, but I wasn’t there emotionally. I’ve felt a little better about my game the last month, especially in my last start in the New York State Open when I tied for 11th. And I’ve felt a little different with the putter, especially after the tip from my mother, so while it has been very emotional with the death of my father and not playing well, it’s great to be able to pull it all together.

“I’m not the most spiritual person on planet earth, but this week I kind of relied on it. I think that played a huge part in how I played.”

When asked what his father might have said about this win, Peter said about the same as he did a year earlier only two months after the Ballos were recognized as the 2020 Family of the Year by the Metropolitan (N.Y.) Golf Writers Association and four months before Mike Sr. was inducted into the Connecticut Golf Hall of Fame. The Met writers didn’t hold the 2020 awards dinner until October due to the COVID-19 pandemic.

The Ballos all worked and competed in the Met Section, which serves Fairfield County, New York and New Jersey. Mike Sr. was too ill to attend Peter’s win at the Country Club of Darien last year, following his progress online. Then Mike Jr. accepted on behalf of his father at his Hall of Fame induction in December.

“Last year, dad was kind of speechless after I won,” said Peter, who also closed with 66 in 2021. “He obviously was extremely happy because he was crying when I got home. He said, ‘Good job. I’m proud of you.’ Right now, he’s probably thinking the same thing and hoping Michael is not too far from winning his first. And that we can kind of continue our name and legacy, especially in this area. I think he’d be just as speechless as last year with me winning my second at the same place where he won his second.”

Mike Jr., 33, who shot 211 to tie for 13th, certainly understood why he and his brother were teary-eyed.

“This is an unreal moment for Connecticut golf and the family,” said Mike, an assistant at Westchester (N.Y.) Country Club. “It’s like you can’t make this stuff up. This is where dad won his last Connecticut Open in 1978, so we had marked the calendar and hoped one of us would do something big. You can’t help but think of divine intervention.”

Emotions also flowed for Madison native and former PGA Tour player Brett Stegmaier, who battled thyroid cancer for three months earlier this year and was back in Connecticut playing on the course where he learned the game. Stegmaier, who now lives in Palm Beach Gardens, Fla., was in a three-way tie for the lead starting the day and maintained that position through a front-nine, 1-under 33.

A birdie at the 10th hole enabled Stegmaier to tie Ballo for the lead, but three-putt bogeys at the 11th and 13th holes and a hooked drive behind trees at No. 16 led to another bogey and a closing 70 for 206 and a tie for second with Matt Shubley of Great River GC in Milford (69) and Jason Thresher of West Suffield (68).

Stegmaier, who won the 1999 CSGA Junior Championship, had been trying to Monday qualify for PGA Tour tournaments, making it only into the Puerto Rico Open, when he waylaid by the cancer scare. Now, he’ll be playing mini-tours in Florida before going to the Korn Ferry Tour qualifying school.

“April and May were not a good time for me,” said Stegmaier, 39, whose father Bruce was in his gallery wearing a hat with a logo of the University of Florida, where his son attended college. “The one good thing is the cancer that I got was the best kind you can get, and now I’m happy to be back playing. I’m disappointed with how I played today, but it’s kind of neat that Peter won after all that he and his family have been through.”

Reinstated amateur Cody Paladino of Hartford Golf Club, whose five different state titles include the 2015 Connecticut Open, was low amateur after shooting 71 for 207 and a tie for fifth with 2020 champion Max Theodorakis of Ridgewood CC in Danbury (71). 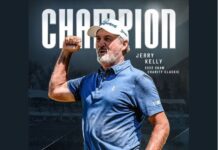