The Francis Ouimet Scholarship Fund recently announced it has received a $3 Million gift from the Harold Whitworth Pierce Charitable Trust, which is the largest gift in The Fund’s history.

“This is a tremendous moment for us. This gift will be added to our endowed scholarship program and primarily targeted to our highly successful inner-city scholarships which now make up 37% of our endowed funds. It will be a big piece of being able to reach $2 Million in awards this year and our second large recent inner-city gift from a foundation. It is a great sign of how strong and appealing our programs are and should help us attract other foundation support. We owe a great thanks to former Ouimet President Dick Reilly who worked with the Harold Whitworth Pierce Trustees in securing this commitment,” said Ouimet Fund President Greg Gailius.

Mr. Gailius went on to explain that the Trust is dissolving and distributing its final balance to three charities.

Mr. Pierce was a renowned figure in golf and investment. He had been President of The Country Club, The Massachusetts Golf Association, and the United States Golf Association. He was very friendly with Francis Ouimet and served with him on the USGA Executive Committee. Mr. Pierce died in 1958. 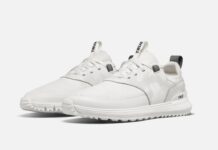