NEWTON, Mass – Nick Maccario, of Bradford Country Club, pumped his right fist after tapping in a short putt on the 18th green at Brae Burn Country Club, to seal the victory in the 36th annual Massachusetts Mid-Amateur Championship.

Marccario was unstoppable during the three-day event and he claimed the Ted Bishop Cup for the first time. His winning margin ties Matt Parziale’s record from the 2015 Mid-Amateur at Marlborough Country Club.

“Ultimately to get this is awesome,” said Maccario, who shot a final round of 1-under par 71, that included five birdies and an eagle. “Anytime you can tie Matt Parziale in anything, I think that’s a good thing.”

This is Maccario’s second Mass Golf victory of the year, as he won the 2019 Massachusetts Four-Ball Championship with Mike Calef, of Pine Oaks GC, in May.

Maccario took a four-stroke lead into the final round over Aikens, who shot a 68 in round two. He stretched the lead with a birdie on the first hole, and pumped his fist in trademark fashion when he hit the green with a 3-iron on his second shot of the par-5 fifth hole. He missed the downhill eagle putt but made birdie to add another stroke to his lead.

“This is probably my best year of golf,” Maccario said. “The birdie on one got my feet under me, and I said, ‘Alright, so I can play under a little more pressure,”

Aikens followed up his 68 on Wednesday with a disappointing 82 on his final 18. He parred the first six holes, but had a disastrous 9 on the par-4 seventh hole. Aikens tried to chip his third shot from the base of the steep hill in front of the green. He scuffed the first shot, and it rolled farther downhill. After his next two shots also rolled back, he finally flopped onto the green and putted out from there. 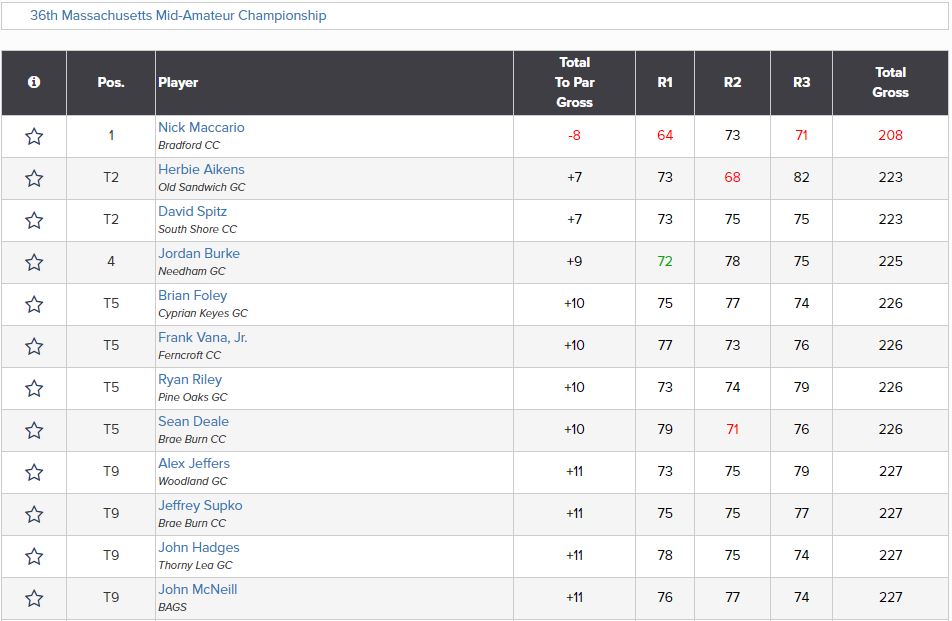 “The smart play would have been to beat a putter up on the green and make five and leave, but I was trying to get up and down,” Aikens said. “Unfortunately, I just made a mess of it, and it got in my head.”

Aikens’ lone birdie came on the par-3 12th when he and Maccario hit right near the pin off the tee. Still, Maccario followed up on the 13th by hitting a recovery shot with his 3-iron onto the green and sinking an eagle putt.

“I love playing with Nick,” said Aikens, who won the Massachusetts Mid-Amateur in 2014. “You just enjoy watching someone play well and then close it out.”

Spitz was steady throughout, starting with a 73 on in round one and shooting back-to-back 75s to close out the tournament. Jordan Burke (Needham GC) shot an even-par 72 on the first day, finishing fourth after closing out with a 75 and 78. Frank Vana, Jr. (Ferncroft CC), who has won the Mid-Amateur a record 10 times, shot a 76 on the final round to tie for fifth with Brian Foley (Cyprian Keyes GC), Ryan Riley (Pine Oaks GC) and Sean Deale, the top Brae Burn finisher.

The 2020 Massachusetts Mid-Amateur Championship will take place from Sept. 22-24 at Andover Country Club.