TRUMBULL, Conn. – A year ago, Meghan Mitchell’s golf career came to a halt thanks to a debilitating back problem that threatened her future in the game.

After competing in the Hartford Women’s Open in June 2021, Mitchell was diagnosed with bulging disks and facet joint impingement, which is degenerative changes to the joints between the spine bones that cause pain, was forced to stop playing golf for six months and wondered if she might ever be competitive again. When asked if she could have imagined winning a second Connecticut State Women’s Amateur Championship in three years on Wednesday July 6 after all that she had had to endure, she emphatically declared, “absolutely not.”

A wide smile told you how much a two-stroke victory over Mia Grzywinski at Tashua Knolls Golf Course meant to Mitchell, especially with her father Steven serving as her caddie.

“It was super frustrating last year because I was mentally struggling and felt lost golf-wise,” Mitchell said after a 6-over-par 78 gave her a 36-hole total of 7-over 151. “For a long time, nothing really great was happening with my game, and the worst thing was we didn’t really know what was wrong with my back. But Jason (Gromelski of Nola Physical Therapy in Darien) put together a plan that changed my swing to alleviate the pain.”

Mitchell, 20, who will be a senior on the Appalachian State golf team in the fall, shot 73 in the first round for a two-stroke lead over Violet Robbins. A wedge to 6 inches set up a birdie at the ninth hole Thursday for an outgoing 1-over 37 and a five-stroke advantage, but she struggled down the stretch with six bogeys and a lone birdie at No. 15 off a 100-yard wedge shot to 7 feet. But not even three closing bogeys could prevent the Country Club of New Canaan product from matching her 2019 victory and becoming the 11th multiple winner of the state’s stroke-play championship.

“I had a really hard time getting a feel for the greens, so I just tried to continue to be patient, which was difficult given the nerves,” Mitchell said in explaining the five-stroke increase in her score. “But I just had the same mentality as (Wednesday), and my dad did a really good job calming me down and helping me focus on one shot at a time.” 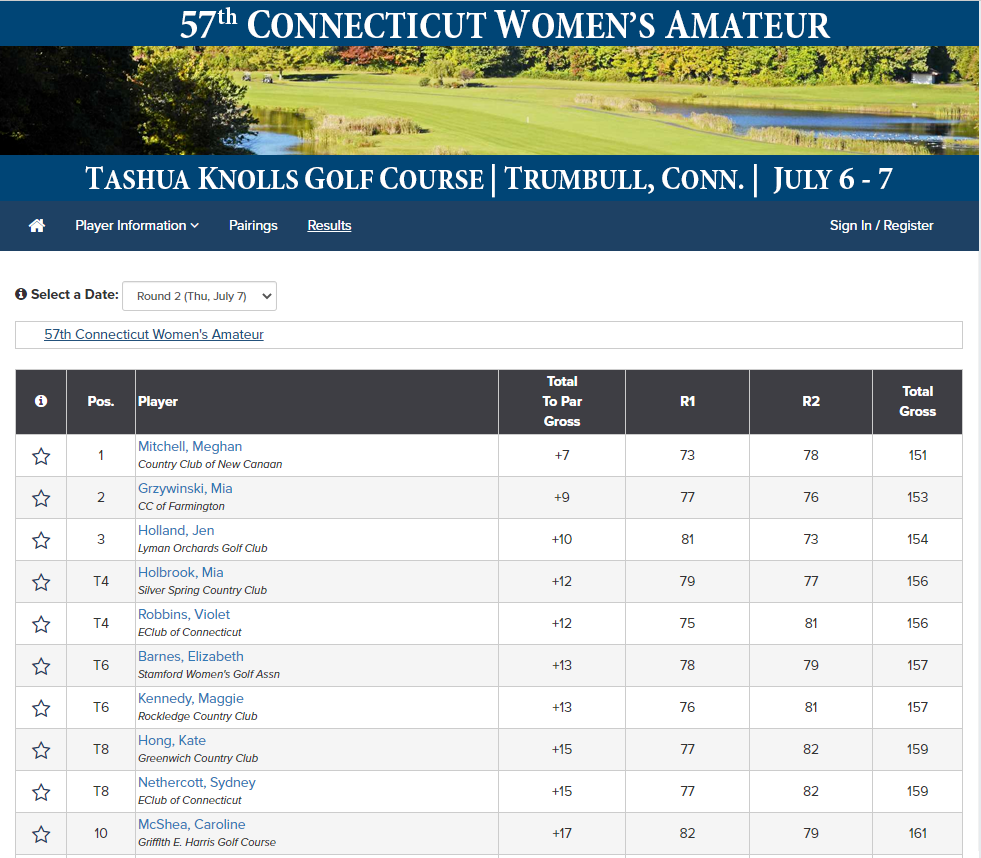 Mitchell had to be patient with her late bogeys and Grzywinski applying pressure. Grzywinski, who won the 2021 Hartford Women’s Open, started the day four strokes back but was only 2-over for the day when she got to the par-4 15th hole. Without a birdie in the tournament, the 2021 Liz Janangelo Caron Player of the Year from the Country Club of Farmington hit her approach to 8 feet to get within a shot of the lead.

“That birdie was kind of funny,” Grzywinski said. “After my drive, I took a bathroom break, and then I was rushing to hit my second shot because my playing partners had already hit their approach shots. I actually thinned the shot, but it ended up eight feet from the hole.”

Grzywinski saved a bogey at the par-5 16th hole with a 20-foot putt, but the recent graduate of Quinnipiac University in Hamden bogeyed the last two holes for 76 and 153.

“I knew it was going to be close,” said Grzywinski, who will be heading to graduate school at Virginia Tech in the fall to pursue a Masters of Public Health with a concentration in Infectious Disease. “I’m disappointed with the finish, but I know in a couple of hours, when I look back on it, I’ll be pretty happy. Overall, this has been a tough season. It has been a grind, so I’m proud that I kept working hard and believing in myself and maybe this is the first step to really getting things back on track.”

The resilient Mitchell had similar sentiments, even after having to withdraw from the Connecticut Women’s Open last month due to her aching back, which she occasionally stretched out to stay loose during the State Amateur.

“I’m a very different golfer than I was when I won the first time given the back injury,” said Mitchell, who won the 2018 Fairfield County Interscholastic Conference title and was second in the 2019 CIAC Girls Championship while at New Canaan High School. “It has been a really tough year physically and mentally, and after six months, it was hard to get back into the tournament setting. It is just so different from playing for fun. It feels amazing to be back playing in tournaments again and to be competitive because for a few weeks at school (this spring), I doubted my game and I doubted myself.

“It will never be as it was, but it feels really good to know I have my game after so long, and it shows all of the hard work and physical therapy is definitely making it better and shown all the hard work that I’ve done has paid off.”

Jen Holland, the 2008 champion from Lyman Orchards GC in Middlefield, was 2 under for 14 holes before three closing bogeys gave her 73, tying the low score of the tournament and an eight-stroke improvement over the first round, for third place at 154. It was the eighth Senior Division title for Holland, 58, who will head to Alaska next week to play in the U.S. Senior Women’s Amateur Championship at Anchorage Golf Course. Robbins (EClub of Connecticut) shot 81 to tie for fourth at 156 with Mia Holbrook (Silver Spring CC-Ridgefield). Robbins and Holbrook shared the Junior Division title.