DANBURY, Conn. – Max Theodorakis says the only pressure he ever feels is self-inflicted.

But the 86th Connecticut Open at Ridgewood Country Club provided a variety of reasons for him to feel in a tense-filled spotlight during this discombobulated golf season.

Theodorakis made his third professional start on a course celebrating its centennial anniversary where he began playing golf at 5 years old under the tutelage of his father, Alex, his caddie who turns 50 on Friday. Theodorakis won the Ridgewood CC club championship at 15 and 16 before heading to Campbell University where he graduated in June with a degree in communications and turned pro to try to qualify for the Travelers Championship. Theodorakis failed to advance to Connecticut’s biggest sporting event but then tied for fourth in a mini-tour event in Georgia in a warmup for his State Open.

The remnants of Hurricane Isiais hit midway through the second round on Tuesday, causing havoc for tournament officials and Ridgewood superintendent Dave Kerr and his staff, who did yeoman work clearing countless large branches, limbs and leaves that blocked some paths to enable to play resume the next morning. It took four days to play the event for the first time, but cooperation on all fronts enabled it to be finished after the Massachusetts, Vermont and Rhode Island Opens were canceled because of the COVID-19 pandemic.

Then there was the prediction of Ridgewood’s most famous member, former PGA Tour and PGA Tour Champions player Ken Green, who grew up caddying at the club, won his second State Open title there in 1992 and still competes despite losing the lower part of his right leg in a horrific RV accident in 2009. Green, who won five times on the PGA Tour, missed the cut, but he proved quite the prognosticator.

Theodorakis notched his first pro victory in style, birdying three of the last four holes and making a par from the woods on t other in shooting a final-round, 5-under-par 66, which tied the low round of the tournament, for a 54-hole total of 7-under 215 and a five-stroke victory over Peter Ballo. Theodorakis was the fifth player to win on his home course, the first since amateur Jay Rice at Wee Burn CC in Darien in 1999, when Green finished second.

“I’ve come close in the tournament before, so to win here on my home course for my first pro win, it all kind of fell into place,” said Theodorakis, 22, who lost to Jeff Evanier in a three-man playoff in 2017, was low amateur and tied for fourth overall in 2018 and tied for eighth last year. “I don’t like to look ahead, but I felt kind of fired up after making birdie at the 15th hole, and when I hit a 4-iron out of the trees to six feet (on No. 16), it freed me up on the final couple of holes.”

The miraculous recovery came after Theodorakis made a 6-foot birdie putt at the 15th hole and before he hit a 5-iron to 15 feet for birdie on the difficult par-3 17th and capped his victory with a 7-foot birdie putt at No. 18 that drew enthusiastic and appreciative applause from many Ridgewood members looking on and before a hearty congratulations from his father.
Green wasn’t on the premises, but he received plenty of credit from Theodorakis for helping him earn a record $14,000 first prize.

“I knew Ken had picked me to win but didn’t feel any pressure, just took it more as a compliment,” said Theodorakis, who was 3-under for the 10 holes that he played Thursday. “I didn’t really know him until we played 10 times this year. He’s a really fun guy and such an accomplished player who won five times on the PGA Tour and has forgotten more about golf than I know. So I just tried to take advantage of his experience and pick his brain as much as I could. He told me that he thought I have what it takes.”

Green was right on, which made Alex Theodorakis plenty excited.

“He didn’t play great, but he putted great,” said Alex, an executive at Aptar in Rockland, N.Y. “It’s pretty close until the end yesterday, when he made a few birdies to get ahead (three strokes). There was a lot of pressure on him with the tournament being on his home course in its 100th anniversary. But as the tournament went on, his course knowledge just kept getting better.” 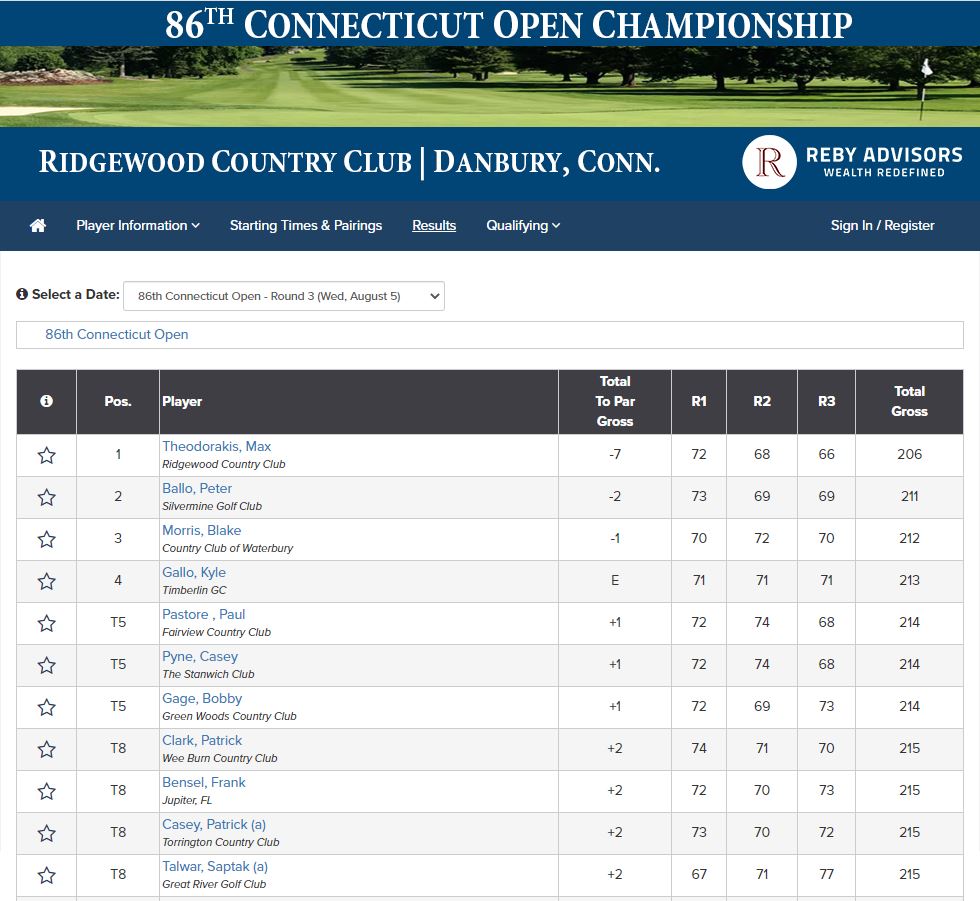 So does his son want to get into radio or television with his communications degree?

Max’s fast finish enabled him to better his target score by one shot.

“I figured 6 under was the number, but my putting was great coming in,” he said. “That’s what won it for me.”

Ballo, whose father Mike won the Connecticut Open in 1969 and 1978, had no complaints after he birdied two of the last four holes in a closing 69 for 211 after only his third, fourth and fifth competitive rounds of the year. It was his first Open tournament after several Metropolitan (N.Y.) Section PGA events were postponed because of the pandemic.

“It was a grind with the waiting, storm and everything that’s been going on, so I’m happy to have played as well as I did,” said Ballo, 29, the assistant pro at Silvermine GC in Norwalk who lives in Stamford. “I’ve been very busy with lessons and arranging member events, but golf has really been something people are into during this time, so that’s a good thing. Golf has been kind of a savior and a saving grace for a lot of people.”

Ballo, who won a PGA Winter Series event in 2018 and the Metropolitan PGA Championship last year, will play in the rescheduled Metropolitan Open and New York State Open in the next few weeks.

“It’s weird because I normally would have played a lot more by now,” Ballo said, “so to shoot 2 under makes me as happy as I can be.”

Ballo, his father, mother Page and brother Mike Jr. were named the Metropolitan Golf Writers Association Family of the Year, but the event was postponed until 2021 because of the pandemic. Ballo’s parents were on hand to see their son play.

Ballo finished one stroke ahead of Blake Morris (CC of Waterbury), who has status on the PGA Tour LatinoAmerica and closed with 70 for 212 for his fourth consecutive top five finish. Morris was one better than Connecticut Golf Hall of Fame member Kyle Gallo (Timberlin GC in Berlin), who spends more time with his family than playing golf these days but shot three 71s in his bid to win a record fifth title.

Low amateurs who tied for eighth at 215 were Patrick Casey of Torrington CC (72) and Saptak Talwar of Great River GC in Milford (77), a senior at Sacred Heart University and native of India majoring in political science who led each of the first two rounds.

All were fortunate to finish after gusting winds and torrential rain stopped the second round at 12:30 p.m. Tuesday with only 21 players having completed play. Beginning at dawn Wednesday, Kerr and his crew cleared debris to enable play to resume at 8:30 a.m. Wednesday, including 13 threesomes that never started their second 18 holes. Lift, clean and place rules remained in effect, and players were allowed to clear any storm-related pieces of debris or get relief from those too large to move.

The second round was finally completed at 3:30 p.m. Wednesday with 42 players making the cut at 6-over 148. The third round began a half-hour later with Saptak Talmar (minus-4), Eric Dietrich (minus-2) and Carey Bina (minus-2) teeing off in the final group at 6:10 p.m. following Theodorakis (minus-2), Jason Thresher (minus-1) and Adam Friedman (minus-1). Dietrich, a former Cheshire High School and University of Connecticut standout, and Theodorakis got into title contention with 66 and 68, respectively.

Darkness halted third-round play at 8:05 p.m. with 33 players still on the course and Theodorakis leading at 4-under after making three birdies in the first six holes before a bogey 4 on his final hole, No. 8. He had a three-stroke lead over Paul Pastore of Fairview CC in Greenwich, who had five birdies and no bogeys for 14 holes, Ballo (1-under for 10 holes) and Talwar, who bogeyed the second hole and double-bogeyed No. 7, the last he played, to fall back.

Third-round play resumed at 8 a.m. Thursday Aug. 6, and the hometown favorite never allowed the “outsiders” a legitimate shot at the title.

“The maintenance guys did a great job cleaning up,” Theodorakis said. “You’d never know there was a hurricane here a few days ago.”

Theodorakis ended up being the major story of a disjointed week and received the record winner’s check from a $60,000 purse that was increased 20 percent thanks to Bob Reby of Reby Advisors.

“Golf is an individual sport, but this week was all about teamwork,” CSGA executive director Mike Moraghan said. “From our staff and volunteers, to the pro shop and clubhouse staff at Ridgewood, to the team at Reby Advisors, and most especially Dave Kerr’s team rescuing the golf course from a devastating storm, it was a collective effort to stage a great championship at a great golf course. And that Theodorakis team sure was impressive with dad Alex on the bag and son Max playing fantastic golf. A great way for everyone to celebrate Ridgewood’s 100th anniversary.”