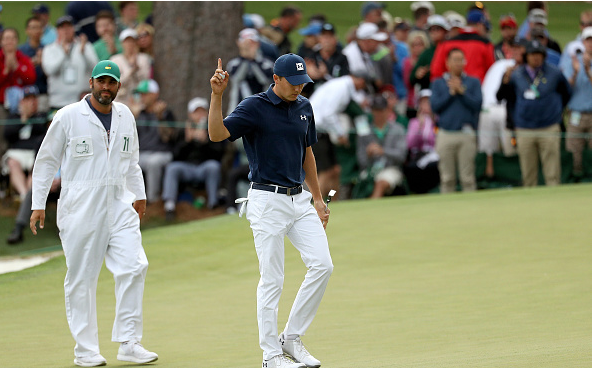 Jordan Spieth fired an opening-round 6-under 66 and will take a two-shot lead into Friday’s second round of the 2018 Masters.

Following three-straight pars (Nos. 10-12), Spieth caught fire on the finale of Amen Corner, and reeled off five-straight birdies (Nos. 13-17). Despite a final-hole blemish, the 2015 Masters champ signed for a low-round 66, and his third 18-hole Masters lead in five starts.

“This golf course brings out a lot of feel in my game, and I think that’s advantageous.” said Spieth, who has struggled for most of the season.

“Once you win here, you have an advantage over anyone who hasn’t won here.”

Spieth finished his first day at Augusta National with seven birdies, three bogeys, and an eagle.

Tony Finau and Matt Kuchar are two back at 4-under par. Finau, who injured his ankle during the Par-3 Contest, offset two bogeys with six birdies to shoot 68 in his maiden round at Augusta National.

Kuchar, meanwhile, overcame two early bogeys (Nos. 4 and 7) and finished his final 11 holes bogey-free with six birdies, including a final one on the 18th to join Finau in second-place.

A logjam of seven players sit T4 at 3-under par, including Charley Hoffman, Henrik Stenson, Adam Hadwin, and Li Haotong, who all bogeyed the 18th to drop a shot. Patrick Reed, Rory McIlroy, and Rafael Cabrera-Bello are the others at 69.

Rickie Fowler birdied 15, 16 and 17 to finish in the red and join Phil Mickelson at 2-under par. Marc Leishman, Zach Johnson, and Bernd Wiesberger are also at 70.

Tiger Woods finished his first round with a 1-over par 73 to sit T30. Defending champion Sergio Garcia carded a 13 on the par-5 15th hole to finish with a day-one 81.

QUOTABLES
“If you get off to a good start, you’re in control of your own fate, versus needing a little bit of help. This Tournament often feels like there’s six rounds with how the weekend grind is – well, really any major. I feel like I’m kind of one round down out of six, so I’m not getting ahead of myself. It’s just it was a really good start.”
– Jordan Spieth

Jeff Smith
Jeff is a Producer for Pro Golf Weekly. He is producing a digital documentary on the 2016-17 PGA Tour season.