HARTFORD, Conn., June 8, 2017 – The Travelers Championship today announced that Jordan Spieth, a two-time major champion who is currently No. 6 in the Official World Golf Ranking, has committed to play in the 2017 tournament. It will mark his debut in the event at TPC River Highlands.

“Jordan has quickly become one of golf’s biggest stars,” said Travelers Championship Tournament Director Nathan Grube. “With the leadership and direction of Travelers, we’re committed to bringing the best players in the world to Connecticut. Having Jordan here for the first time definitely adds a level of excitement to our tournament.”

Spieth, a 23-year-old from Dallas, is a nine-time winner on the PGA TOUR and was named the TOUR’s player of the year in 2015. That year saw him win five times, including the season’s first two majors, at the Masters and the U.S. Open. He finished T4 and a shot out of the playoff at that year’s British Open. One month later, he was second at the PGA Championship. His victory at the 2015 TOUR Championship by Coca-Cola locked up the FedExCup title and helped produce a 26-week run as the No. 1-ranked player in the world.

He has added three TOUR wins since then: two in 2016 and one at this year’s AT&T Pebble Beach Pro-Am.

Spieth joins a player field that includes two others currently ranked in the top 10 – No. 2 Rory McIlroy and No. 3 Jason Day – along with Justin Thomas, Patrick Reed, Bubba Watson, Jim Furyk and Russell Knox, the 2016 Travelers Championship winner. The 2017 Travelers Championship will be held June 19-25, and tickets are now available. For more information on this year’s tournament, visit www.TravelersChampionship.com.

About the Travelers Championship

The Travelers Championship, held in Cromwell, Connecticut, is one of the premier events on the PGA TOUR and part of the FedExCup series. The tournament proudly supports the PGA TOUR’s Tradition of Giving Back by donating 100 percent of net proceeds to charities. 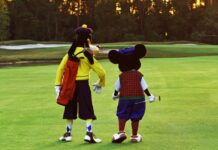