GROTON, Conn. – As the years progressed, Jim Becker has appreciated the game that he has played for nearly six decades more and more.

Becker never appreciated golf more than on Tuesday, when he birdied two of the last three holes for a second 3-under-par 68 and a two-stroke victory over defending champion Robin Byrd in the storm-delayed final round of the 38th Connecticut Senior Open at Shenecossett Golf Course.

“This is the highest on the gratification scale,” said Becker, the head pro at Blue Fox Run Golf Club in Avon. “I’m 64 years old, so you never know when you’re going to win again, but the more you win, the better it gets.

“Being close is always fun, and to get it done this time is very gratifying. I’m just trying to accumulate as many wins as possible and hopefully get in the Connecticut Golf Hall of Fame. I didn’t play a lot in the state through the years so people might not know what I’ve accomplished, but maybe this will get me some consideration.”

Maybe more than just some. Becker’s latest victory was historic, as he became the first player to win this event three times (2012, 2015 and 2020) and the Connecticut Open twice, in 1975 and 1976 as an amateur. And he did it in a championship fashion.

Becker, who began the day tied with Byrd, sank a 22-foot par putt from the fringe after a poor bunker shot at the 15th hole and then made a 9-footer for birdie at No. 16 for a one-stroke edge. He made a good par on No. 17 after his drive stopped on the edge of a fairway bunker, forcing him to stand in the sand and hit his approach off a sidehill lie. His 9-iron shot from 131 yards stopped 18 feet left of the hole, he two-putted for a par and retained his lead when Byrd missed from 6 feet to tie.

On the final hole, the par-5 18th, Byrd hit his second shot 70 feet right of the cup while Becker was in a greenside bunker and blasted 6 feet long. After Byrd rolled his eagle bid 4 feet to the left, Becker converted his birdie try to clinch the victory, worth $4,000.

“I’ve won 60 to 70 tournaments, but this is first time that it came down to a putt on the last hole,” a smiling Becker said. “That’s what it’s all about, and to make that last putt was really special.” 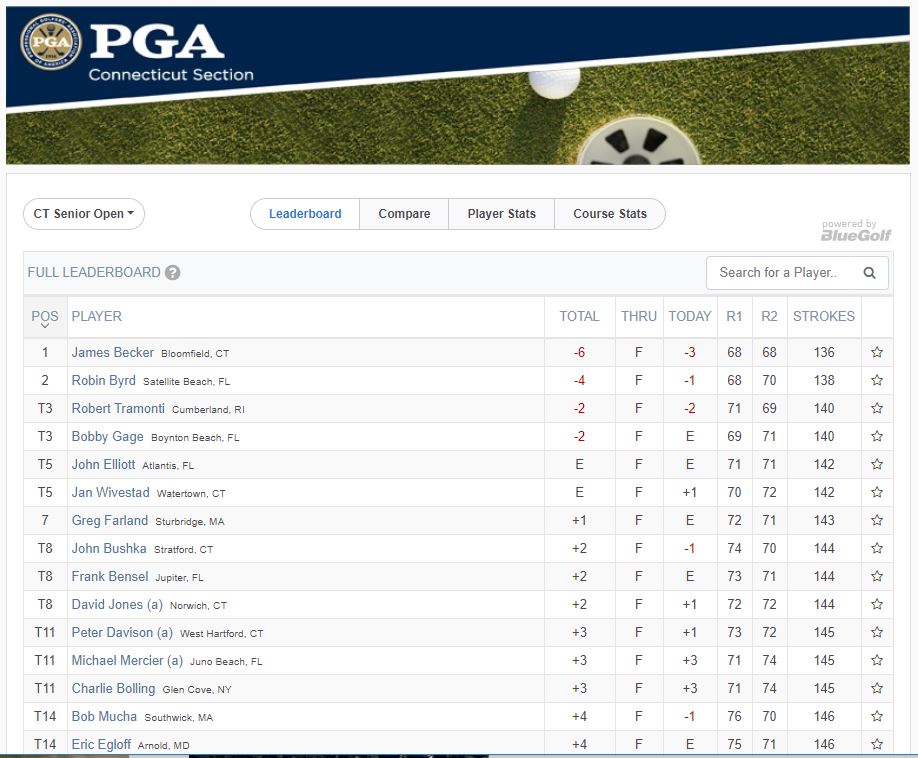 Byrd missed his 4-footer for birdie, but it didn’t matter because his 70 for 138 beat 2018 champion Bobby Gage (71), the new head pro at Green Woods Country Club in Winsted where he learned to play the game, and Robert Tramonti, of Cumberland, R.I., who shot a 3-under 32 on the back nine, capped by a birdie at No. 18, for 69, the second-lowest round behind Becker.

Former Central Connecticut State University All-American John Elliott, the 2016 runner-up and 2017 champion who played on the PGA Tour and PGA Tour Champions, shot a second 71 to tie for fifth with Jan Wivestad, the head pro at Crestbrook Park GC in Watertown. Wivestad was only two strokes back at the turn but made a double-bogey 6 at No. 10 just before the horn sounded stopping play at 2:40 p.m. and then bogeyed the 11th hole after returning from a 50-minute delay.

David Jones, the club champion at Mohegan Sun Golf Club in Baltic, shot a second 72 to tie for eighth and was low amateur for the third time, earning $300 in merchandise credit. Ironically, he has won that title in the same years that Becker captured the tournament.

But it was really a two-time horse race after Gage failed to make any kind of charge after starting one stroke back in third.

“I just didn’t have it,” said Gage, 55, who has played on the PGA Tour, Kerry Ford Tour and PGA Tour Champions. “I didn’t have good control and just didn’t drive the ball very well, which is what you have to do here.”

After starting at 3-under, Becker and Byrd each birdied the first hole, and Becker took the first lead when Byrd bogeyed the difficult par-3 fourth. A Becker bogey at No. 7 tied it again, but he hit a 6-iron to 6 feet to set up a birdie 2 at the ninth moments before the play was stopped. Becker extended his lead to two strokes with a wedge to 5 feet at the 11th hole, but a flubbed chip and Byrd’s 30-foot birdie putt that he thought he had left short at No. 12 produced a two-shot swing and tied it again.

Byrd bogeyed the 13th hole when he pulled his approach into a bunker and missed a 10-foot par putt, but another 30-footer for birdie at No. 14 tied it for a fourth time. But Byrd could do no better than four pars down the stretch, while Becker put together his clutch finish for the win.

“I hit a lot of greens but didn’t hit it close enough,” Byrd said. “Jim scrambled really well, and that’s what you have to do to win.”

Byrd, 59, planned to return home to Satellite Beach, Fla., and then head to Grand Blanc, Mich., for the resumption of the PGA Tour Champions, where he played three events in February.

Becker, meanwhile, will get ready for the Connecticut Open at Ridgewood Country Club in Danbury on Aug. 3-5. He’ll be going on a high after help from several people.

“I want to thank everyone at Blue Fox Run,” Becker said. “General manager Barry Wilson is always supportive of letting me play, and you need that. And I’m very thankful and grateful to the Connecticut Section PGA for the having the tournament because a lot of events that I usually play in were canceled (because of the COVID-19 pandemic). It’s an awesome venue and why they get 156 players every year.”

“Mike was the best chipper and bunker player I’ve ever seen and got everything out of every part of his body and heart,” Becker said. “He gave me some tips about playing out bunkers, and I’ve been better out of the sand ever since. My bunker play was really good this week, and if it wasn’t, I wouldn’t have won.”