SEEKONK, Mass. – Frank Dully, of Kernwood Country Club, produced a string of five birdies in an eight-hole stretch to earn a one-stroke victory at the third stop of the New England PGA Stroke Play Series on Monday July 6.

Playing in the final group, Dully birdied Ledgemont Country Club’s 3rd, 5th, 8th, 9th and 10th holes and had just one bogey on the card to post 67, one better than Nick Jagoe, of Allendale Country Club, and Rich Berberian, of Vesper Country Club, who each shot 3-under par 68.

Jagoe, who entered the day in 4th place in the season-long Avidia Cup Standings, made four birdies on the front-9 and was steady on the back, with a birdie and eight pars, en route to a 3-under par 68. Jagoe has finished in the top-5 in all three Stroke Play Series events.

“I’m on a little bit of a heater right now and I’m just trying to keep the momentum going,” he said. “I like the fact that it’s condensed a little bit right now. Going one right after another you can stay in some sort of rhythm as best as we can.”

Berberian, who learned last week he is in the field at the upcoming PGA Championship in early August, made five birdies and just two bogeys to match Jagoe at 68. He heated up early in the back-9 with three-straight birdies on holes 12-14.

“I putted pretty well today,” Berberian said after his round. “I made a couple putts that I probably shouldn’t have and I didn’t miss any short ones. I kept it in play, I used the same ball all day. If I can do that and putt pretty good I’ll be in pretty good shape.”

Greg Farland, of Marlborough Country Club, who entered the day atop the Avidia Cup Standings, had another strong performance with a 4th-place finish at 2-under par fueled by three front-9 birdies. 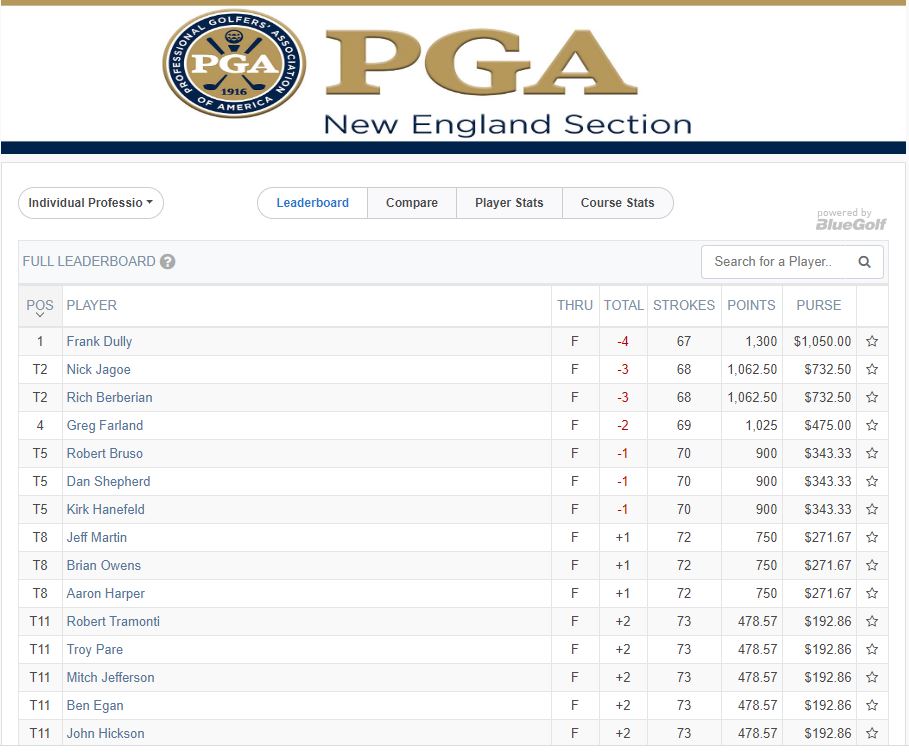