It was par for the course.

“People come into the parking lot and they see all the cars,” head pro Dick Fagan said in the pro shop. “They come in here and say, ‘Wow, you guys must be having your busiest day of the summer.’ We’re like, ‘No, everyday is like this.’ They look at you like, ‘Really?’”

“We’ve been known as the busiest 18-hole golf course on the Cape, even pre-pandemic,” director of golf Roman Greer said, “and post-pandemic with the big surge, we’re killing it.”

Greer said Cranberry Valley hosted 48,000 rounds during its most recent fiscal year that ended on July 1. The fiscal year before that, the club hosted 55,000 rounds, its most since the Tiger Woods boom in the 1990s when tee times weren’t spread out as much.

Since the pandemic began in 2020, Cranberry Valley has booked tee times every 10 minutes, rather than the standard 8 or 9 minutes, to spread out play more.

“We pack the golf course,” Greer said, “but there’s space between groups so it makes for a very friendly round.”

Greer said the average round lasts four hours and 15 minutes. The GPS on the carts remind golfers how close they are to that 4:15 goal. Our foursome was ahead of schedule until the last couple of holes and we finished in 4:20.

On the day we played, the tee sheet was booked from 6 a.m. until 6 p.m. That wasn’t uncommon. For the first hour and a half each morning, golfers also begin on the 10th tee.

“We have a great reputation for customer service,” Greer said, “consistent golf course conditions. It’s easy to make a tee time. Three clicks on our website books you a tee time. People really like the 10–minute tee time intervals. There’s a lot of space out there. Even though we are really busy every day, when you’re out there, you don’t feel like people are right on top of you. You feel like you’re on your own. I think it’s the whole experience. It’s a very friendly and enjoyable atmosphere.”

Cranberry Valley, a Geoffrey Cornish and William Robinson design, was built in 1974 and is owned and operated by the town of Harwich. It’s open to the public.

“One of the things that makes our golf course stand out is the friendly layout,” Greer said. “You can always find your ball and play it. There’s not a whole lot of out of bounds. We have trees on the sides of the fairways that are cleared out pretty good so it’s easy to find your golf ball. I think people just find it to be a challenging, but very friendly golf course.”

Trees were also cleared from around the greens to allow more sunlight to reach them and to leave golfers with good lies even if their approach shots miss the greens.

Cranberry Valley lists five sets of tees on its scorecard and plays 5,060 from the forward tees and 6,482 yards from the back tees. We played from the 6,142-yard white tees. Fagan estimated there are 65 bunkers and we found our share of them.

Harwich is well known for its cranberry bogs and the entrance of Cranberry Valley is located across the street from one.

Cranberry Valley was surprisingly green the day we played it because Greer said the two-tenths of an inch that fell the day before was the first rain to hit the golf course in more than 50 days. 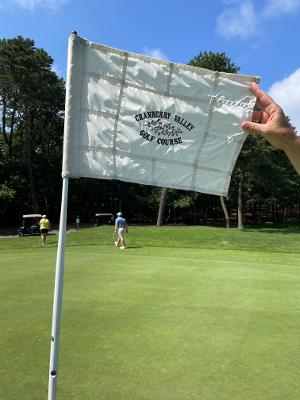 Greer picked the par-5, 18th hole as the course’s signature hole. It plays 350 yards from the forward tees to 521 from the back tees and has two doglegs to the right so it’s shaped like a horseshoe.

“If you hit a good drive,” he said, “you have a chance to think about going for the green in two.”

The greens aren’t huge or multi-tiered so Greer said golfers shouldn’t need a lot of local knowledge to putt them successfully.

“They have some break in them, but nothing too crazy,” he said.

Mark Mungeam, owner of Mungeam Cornish Golf Design in Douglas, renovated the range and designed and built a short game practice area with two greens in 2007.

“It’s easy to work with Mark,” Greer said, “because he has all of Cornish’s original plans of the golf course.”

Summer greens fees cost $79 and carts cost $24 for 18 holes. Greens fees are discounted after 1 p.m. each day and all day after Labor Day on weekdays.