HARTFORD, Conn. – Bubba Watson has been the biggest player supporter of the Travelers Championship on many fronts for years, and he added another this week.

A three-time winner of Connecticut’s biggest sporting event who also captured the Masters in 2012 and 2014, Watson donated $25,000 to the fund to raise money for the Hole in the Wall Gang Camp in Ashford that sustained extensive damage due to a significant fire that destroyed four buildings on the grounds on Feb. 12.

“Travelers Championship, put me down for $25k!!,” Watson said on the Travelers Insurance Facebook page. “Happy to help The Hole in the Wall Gang Camp. Rebuild so they can keep doing what they do best? Donate if you can at Holeinthewallgang.org/rebuildcampfund.”

The insurance magnate is matching up to $1 million in donations to the Camp, a nonprofit 501©(3) organization, residential summer camp and year-round center serving more than 20,000 children and family members each year who are coping with cancer and other serious illnesses and conditions, all free of charge. The Camp, founded by the late actor Paul Newman in 1988, has been the chief beneficiary of the tournament for 14 years and financed by Travelers, whose innovative Hospital Outreach Program brings spirit, joy and healing power to children in hospitals throughout the Northeast and mid-Atlantic. 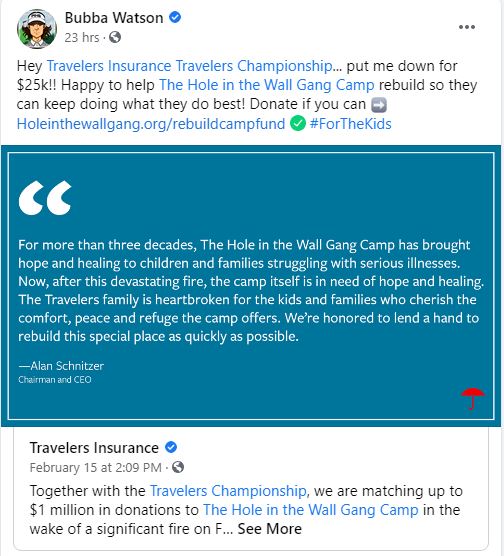 “For more than three decades, The Hole in the Wall Gang Camp has brought hope and healing to children and families struggling with serious illnesses,” said Alan Schnitzer, Chairman and Chief Executive Officer of Travelers. “Now, after this devastating fire, the camp itself is in need of hope and healing. The Travelers family is heartbroken for the kids and families who cherish the comfort, peace and refuge the camp offers. We’re honored to lend a hand to rebuild this special place as quickly as possible.”

More than $20 million has been raised for charity since Travelers became the title sponsor in 2007, and this isn’t the first time that Watson has gone out of his way to help the tournament that he won in 2010, his first of 12 PGA Tour victories, 2015 and 2018. He donated $100,000 to the Bruce Edwards Foundation Benefit Dinner in 2016 that raised more than $1.1 million for ALS, which claimed the life of the Wethersfield native who caddied for 30 years on the PGA Tour, mostly for Tom Watson, who helped found the foundation.

“I promised him before he passed that I will continue my life’s goal to raise funds for research until this disease is toast, and that’s what I’m doing here tonight,” Tom Watson said during his dinner speech in front of more than 1,000 people, including dozens of PGA Tour players and caddies.

Jay Fishman, a Travelers executive and chairman of the dinner, also gave an inspirational speech only two weeks before he died of ALS.

After his third Travelers Championship victory, one fewer than recordholder Billy Casper, Bubba Watson donated $200,000 to the event so it would reach $2 million for charity for the first time.

During the victory ceremony, Watson’s children, Caleb, then 6 and Dakota, 3, received small trophies of their own. Watson didn’t want what he had done to go public, but tournament officials insisted he receive the recognition that he deserved.

“Bubba is incredibly generous and has a huge heart, and the camp was very moved by his support,” tournament director Nathan Grube said. “We’re relieved, first and foremost, that no one was injured in this terrible fire, and we’re grateful to all of the first responders for their brave efforts under extremely hazardous conditions. We know how much campers and their families were looking forward to returning to camp – and to a sense of normalcy – after in-person programming was suspended last summer due to COVID-19. The Travelers Championship is committed to being there for the camp at every step of the way as it recovers from this tragic event.”

Miriam E. Nelson, president and CEO of Newman’s Own Foundation, said the group was “devastated” by the fire.

“I have encouraged my colleague and friend, The Hole in the Wall Gang Camp CEO Jimmy Canton, to rebuild in a manner that not only meets the current needs of the children living with illness and their families but also helps them pursue their boldest dreams for the future.”

“We were particularly thrilled by the inspiring $1 million match made by Travelers and the Travelers Championship,” Nelson said. “The community response to this match is heartening, and it’s absolutely critical that people continue to donate to help this multi-million dollar rebuild fund. Hole in the Wall was the first of its kind, and we hope that our commitment above and beyond the match will allow the Camp to continue to be cutting edge in every imaginable way for the brave campers and families they serve.”

Jimmy Canton, Chief Executive Officer of The Hole in the Wall Gang Camp, said, “We are moved beyond words by the extraordinary generosity of our friends at Travelers and the Travelers Championship, who have lifted the hearts of our camp community during a very difficult time. When we lost our founder, Paul Newman, many years ago, Travelers stepped forward in a big way and has stood beside us every day since. Their leadership, employees and our friends at the Travelers Championship have all made Paul’s dream of ‘a different kind of healing’ their own and continue to be unwavering champions for our children and families. They are beloved members of our camp family, and their loyalty is truly inspiring. We envision both new buildings that reflect the latest accessibility standards and innovative programs that are as inclusive and welcoming as possible.”

An automatic fire alarm went off at the Ashford complex just before 5 p.m. Friday February 12, and witnesses soon began calling in reports of a huge column of smoke rising from the site. Firefighters found the attached Arts & Crafts, Woodshop and Camp Shore buildings ablaze and flames licking at the Cooking Zone building. That’s where they held the line, preventing the fire from reaching the dining hall.