SOUTHWICK, Mass. – As Bob Mucha made the three-mile drive from his house to The Ranch Golf Club on Tuesday morning, he learned the start of the final round of the Connecticut PGA Professional Championship had been delayed for an hour due to fog.

So Mucha made a quick about-face, returned home and had a breakfast of two eggs over easy from his farm and a piece of bread. Mucha ended up needing all the strength that he could muster, finally making a 14-foot birdie putt on the second playoff hole to defeat defending and two-time champion Chris Tallman.

Mucha and Tallman finished 36 holes at even-par 144 on the rolling, tree-lined course and each made 6-foot par putts on the final hole to get into the playoff. It was the second tournament victory for Mucha, who won 21 years earlier, though he did capture the Northeast New York Section title in 2009.

But Mucha said his latest win “is more than gratifying.”

“I hadn’t been playing well at all,” Mucha said. “If I did play well, I’d made a double bogey coming in to mess everything up, so this is really unexpected.”

Mucha, 57, of Edgewood Golf Course, which is also three miles from The Ranch, had a one-stroke lead after an opening 71 but had to work hard for a closing 73 that included birdie putts of 20 and 12 feet on the 14th and 16th holes. After saving par with a deft 50-foot chip on No. 18, he hit an 8-iron on the second playoff hole, the par-3 17th, and made the decisive putt after Tallman missed from 18 feet.

The win was worth $4,000 and 100 Player of the Year points and qualified Mucha for his ninth PGA of America Professional Championship on April 17-20, 2022, at Omni Barton Creek Resort & Spa in Austin, Texas. But Mucha said he doesn’t plan to go to Texas.

“I can’t compete with the young guys,” Mucha said. “They just hit it SOOOO far.”

Tallman, Jason Gobleck (third at 145), Mike Martin (parred first playoff hole to beat Joe Cordani for fourth) and the to-be-determined Section Player of the Year qualify for the national championship as of Tuesday. If the POY finishes in the top three, the first alternate, Martin, goes to Austin, along with Cordani because Mucha likely won’t play. The POY will be determined after the Section’s final major event of the year, the Match Play Championship on Oct. 5-7 at Indian Hill Country Club in Newington. The top 20 in Austin advance to the 2022 PGA Championship at Southern Hills Country Club in Tulsa, Okla.

Tallman earned $2,500, 75 POY points and a fourth consecutive berth in the national championship, though he didn’t play in 2020 because the event was canceled due to the COVID-19 pandemic. He had two birdies, one bogey and 15 pars in shooting 71 and missed several good birdie chances that could have given him a third title.

“No real fireworks,” said Tallman, the general manager at Orchards Golf Club in Hadley. “I hit the ball pretty solid and hit the driver fantastic for two days, but I left some putts short. But other than not making many (birdie) putts, I’m really satisfied because I haven’t been able to play much because of all of my club duties.”

Gobleck, 51, of the Golf Center at Lyman Orchards in Middlefield, completed a rare daily double thanks to some good fortune that enabled him to shoot 70, matching the low round of the day with Fran Marrello, a PGA Life Member and Connecticut Golf Hall of Famer who has won a record 25 Connecticut Section individual titles.

Gobleck won the Section Senior Championship on Aug. 31 at Madison Country Club to qualify for the 33rd Senior PGA Professional Championship, which will be played on Oct. 21-24 at the PGA Golf Club in Port St. Lucie, Fla. He reached the regular national championship for the first time thanks to hitting 15 greens in regulation on the way to making three birdies and only one bogey, though the latter needed an asterisk.

Gobleck holed a 30-yard bunker shot over a knoll with a pitching wedge for birdie 2 at the eighth hole.

“You’re going to make bogey nine out of 10 times there, so I was really fortunate the ball went in,” Gobleck said with a smile.

“I made a 30-foot putt, but he hit a phenomenal shot,” said Cordani, one Gobleck’s playing partners.

Then with his chance to achieve a much-desired goal to play in Austin within reach, Gobleck sliced his second shot on the par-4 18th hole off a rock wall. His ball ricocheted 30 yards short of the green, then he pitched his third shot 15 feet past the hole but made the putt for par and $2,000.

“I’d been playing really well coming in,” Gobleck said, “so my goal was to give myself a chance to qualify for the nationals. I’ve been putting better since I went to a claw grip in June and been hitting the ball better, which leads to more greens in regulation.”

Martin, the 2018 runner-up from Tashua Knolls Golf Club in Trumbull, rallied from two bogeys and a double bogey in a 4-over 40 on the front nine to shoot 1-under 35 on the back for a share of fourth and earned a ninth national championship berth. Cordani, of Hop Meadow Country Club in Simsbury, will likely play in his third nationals after he made eagle 3 on the first hole in shooting 72. Martin and Cordani each won $1,625.

The Section Championship was presented by Cadillac, Club Car and Rolex. Supporting sponsors were Titleist/FootJoy, NIKE and TaylorMade. Presenting sponsors were Golf Channel and the PGA Tour. The 41 section championships and the national tournament offer a combined purse of more than $1.5 million. 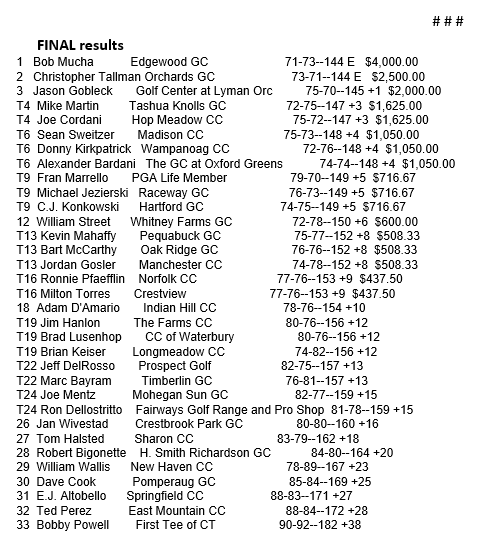