WESTON, Mass – Two years ago, 18-year old Angela Garvin, of Agawam, made it all the way to the final round of the 2017 Massachusetts Women’s Amateur and lost it on the 18th hole.

This year she made up for it and then some, winning the 2019 championship at Weston Golf Club on August 16 by beating 17-year old Anne Walsh, of The Country Club, 4 & 3 in the finals match in the Bay State’s longest running competitive golf tournament.

Angela Garvin has had a dream summer on the golf course this season, winning the 2019 Girls Junior just over one week ago and using that as a springboard towards a victory in the Massachusetts Women’s Amateur Championship. Garvin won stroke play medalist through the first two rounds of competition, as she was the only player to be combined under par for the stroke play qualifier. Her steady play has given her the confidence needed going into her Freshman year at the University of Maryland.

This is just the fourth time that a Junior Girl’s Amateur Champion has won the Women’s Amateur Championship in the same year. The first occasion coming in 1954 with Joanne Goodwin, followed by Loren Milhench in 1985 and most recently in 2005 when Chelsea Curtis.

“I don’t think I can really ask for any better way to end off the season before starting school, ” said Garvin. “It’s just helped my confidence. I think I’ve proved to myself how I can play how I think I should be able to play and I just hope that I can carry this momentum into the fall at Maryland.”

Usually a razor sharp iron player, Garvin had to rely on her putter today, as she had some longer looks at birdie and par today.

Garvin found herself in a similar situation as two years prior, leading the Championship match by multiple strokes. This year though would be different, as she wanted to make sure she held on to the lead to clinch her first Championship.Although it hurt at the time, Garvin used it as a positive learning experience.

“I learned that you have to stay focused,” said Garvin. “Even when you get a lead, you can’t sit back. It was definitely really tough to lose that day. But I think I learned from that and I used that today because I did have a lead on the front. It helped me to stay focused. Even just two years ago, losing that tournament gave me so much more motivation to come back and you know, maybe win it. So when I found out I was in the finals today just I wasn’t thinking about it, but I was thinking about all I learned.”

Anne Walsh had a great week herself. Upsetting Megan Buck and Hannah Ghelfi in match play on Wednesday. Defeating Rebecca Skoler on 18 in her morning match had her in terrific position going into the championship.

“Yeah, this morning’s match was really fun,” said Walsh. “I played well on the front nine and then Rebecca (Skoler) made some great putts, she birdied 17. Then on 18 to have that shot coming in. I think I just kind of pretended I was at the range just put a good swing on it. Then I was able to stick it close so that was a really nice way to finish.”

Walsh has been playing in Mass Golf Women’s events for most of of her childhood, and loves the competition and relationships it brings.

“I think Junior Golf in Massachusetts is definitely on the rise,” said Walsh. “I think when I first started there were fewer girls and now to see players like Sofie Robinson out here she’s younger, and Christine Mandela. There’s a lot of great girl golfers playing in this event. It’s nice to see that it’s growing.” 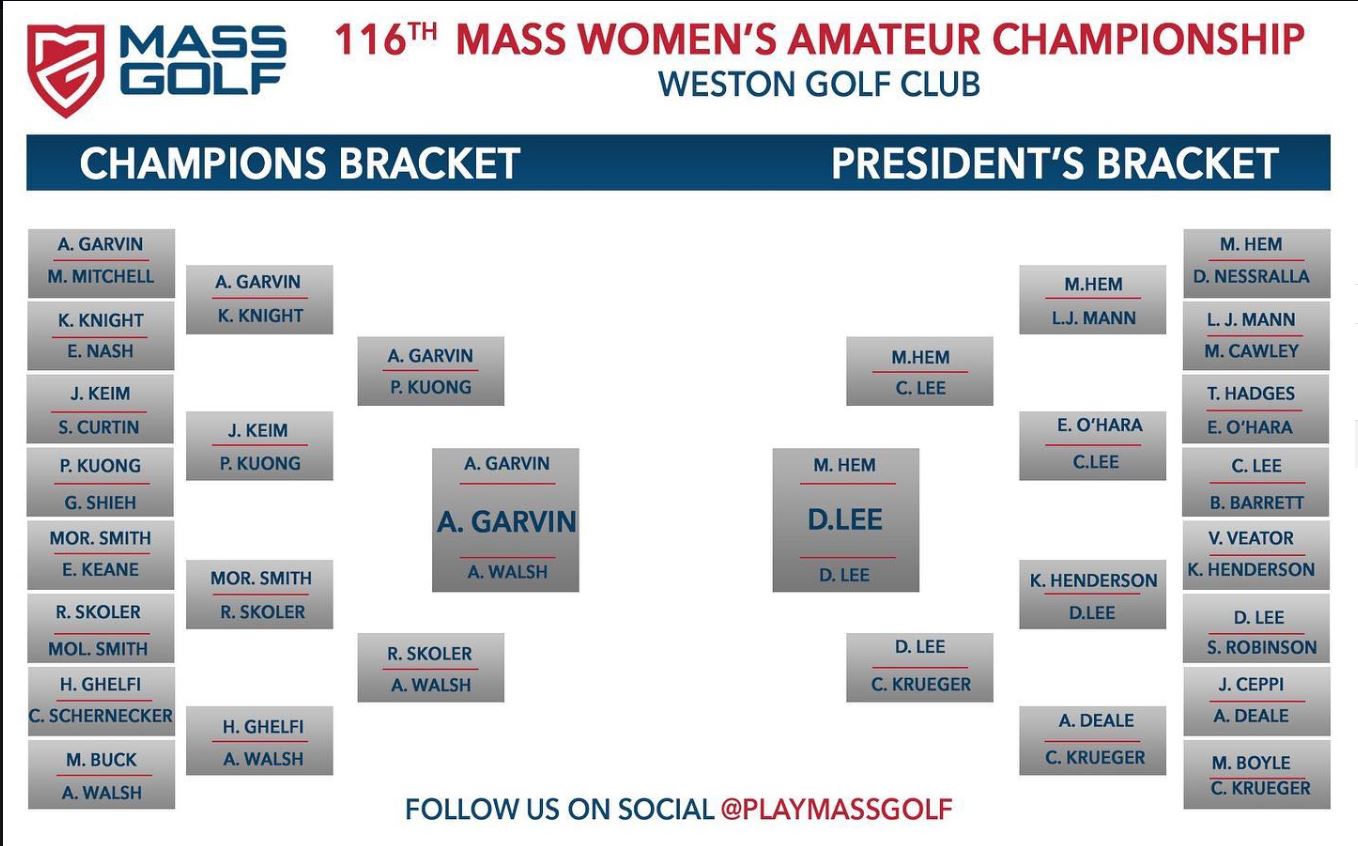 In the President’s Cup match play bracket, Danielle Lee (International) defeated opponent Melissa Hem (Dedham C & PC) through 16 holes of tough competition. Lee, the 2018 runner-up in the President’s Cup flight, trailed Hem through the first seven holes of play before striking on the next three holes to take control of the round. She would square up the match on the 296-yard par 4 8th hole, make par on the 9th hole to go 1 up on Hem, and again on the 10th hole to ride a 2-up lead for another string of holes before adding another onto the card at the 15th hole.