SIMSBURY, Conn. – Four years ago, after the Lapples returned to Ridgefield from Southern Pines, N.C., eighth-grader Alexsandra and her father Bob contacted Connecticut State Golf Association Women’s Golf Competitions and Development director Marsha Rupp about where the youngster could play to try to continue to improve her game.

Rupp’s advice has proven to be quite valuable. After Alexsandra notched several notable national junior victories, the Lapples were back in Connecticut this week for the Connecticut Women’s Open. As fate would have it, Rupp ended up presenting Alexandra with trophies for being low amateur and the overall champion of the tournament Tuesday at Hop Meadow Country Club.

Lapple, 17, overcame a shaky start that included a four-putt from 15 feet for a double-bogey 5 at the third hole and a three-putt bogey from 25 feet on No. 18 that dropped her into a tie with pro Samantha Morrell. But Lapple, who will be a senior at The O’Neal School in Southern Pines, N.C., put the late miss that gave her a closing 5-over-par 77 and 36-hole total of 2-over 146 out of her mind and managed to 2-putt from 60 feet, making a 3-footer for par, on the first extra hole while Morrell missed a 4-foot to extend the competition.

“It was very frustrating four-putting, and it didn’t put me a great position for the rest of the way,” said Lapple, who started the day with a two-stroke lead after an opening 69. “The fourth hole (a bogey) was a cooling down, and I’ve played a lot of tournaments where I’ve been in that position, so I didn’t let in bother me.” 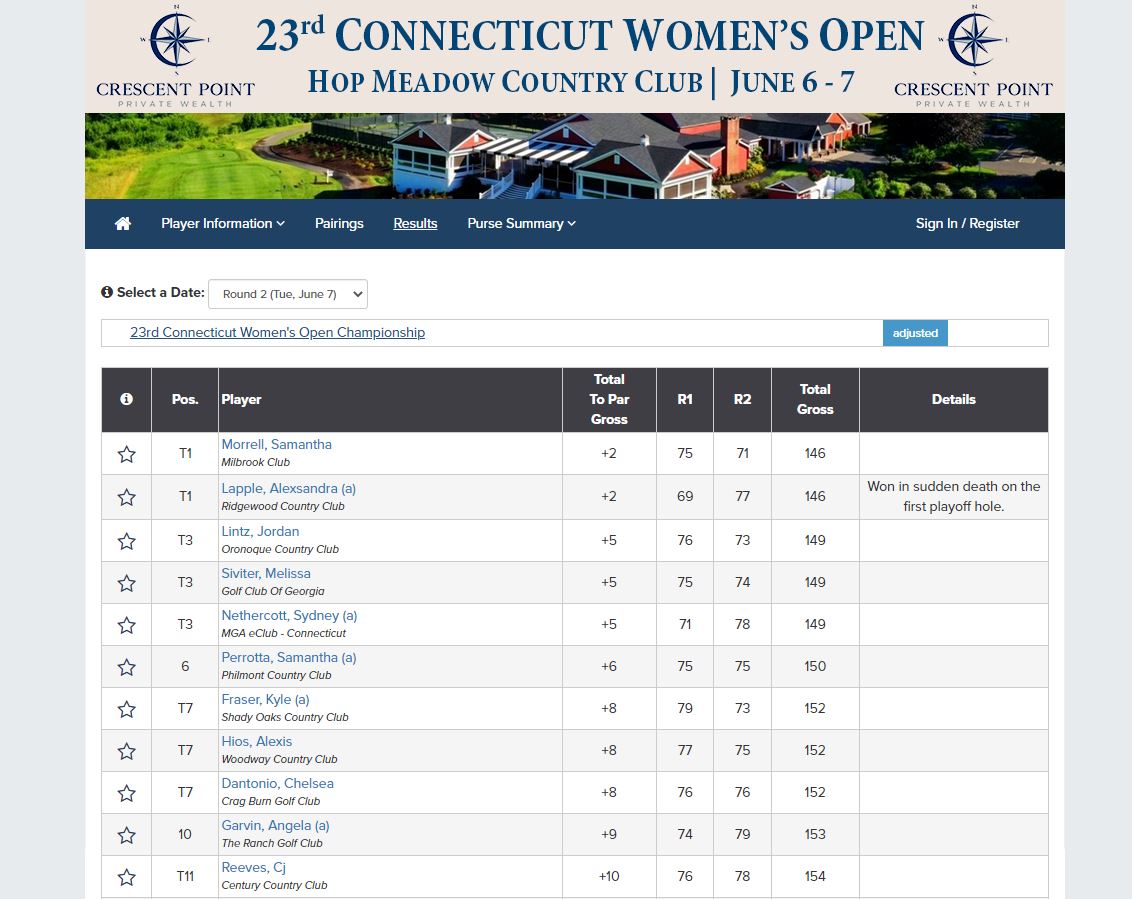 Lapple had 12 pars and two bogeys the rest of the way in windy conditions that got worse as the round progressed.

“I hit a lot of good shots, hit 15 greens in regulation and made every putt,” Lapple said of her first round that was the low score of the tournament by two strokes. “Today I was less consistent and had a lot longer (birdie) putts. But I’m very excited, very happy.”

Though Morrell would have liked to receive the winner’s trophy, she was more than happy to accept a winner’s check of $3,000 from the $11,000 purse. The teaching pro at the nine-hole Milbrook Club in Greenwich and Durland CC in Naples, Fla., opened with 75 but quickly got into contention with three birdies in the first seven holes. After a three-putt bogey at the eighth hole, she hit a 7-iron shot on the 165-yard 12th hole that stopped two feet the cup. Bogeys at the 14th and 16th holes dropped her a stroke back, but she stayed alive with a deft chip to 3 feet for a saving par at No. 17 and got into a playoff when Lapple had her three-putt bogey in the final group.

“I really had no expectations today, and that was the key of the round,” Morrell said. “I just focused on getting out and playing, and I birdied the first hole (from 15 feet) and that set the tone for the day. I didn’t really know how I stood all day, and that’s better sometimes.”

Morrell, who grew up in North Kingston, R.I., and began playing golf at 9, said she putted a lot better and made some good saves than in the first round, especially as the wind kept getting worse.

Tied for third at 149 were 2011 winner Jordan Lintz of Oronoque CC in Stratford (73), defending champion Melissa Siviter of the Golf Club of Georgia (74) and Fairfield University junior Sydney Nethercott of MGA eClub-Connecticut (78).