DORAL, Fla. – The Blue Monster is the most famous of Trump National Doral Miami’s four courses, but it’s certainly not the only one worth the Doral experience, following a $250 million resort-wide investment.

And like them or not, the Trumps have done an outstanding job of renovating the historic resort that was a longtime host to various PGA Tour events and one-time home of legendary comedian Jackie Gleason.

Of Trump Doral’s four courses, the Red Tiger might be the easier of the quartet, although it’s loaded with water hazards. Re-designed by Gil Hanse, the same architect who renovated the Blue Monster, the Red Tiger plays only 6,395 yards from the tips, but because it sits on only 201 acres, it requires more local knowledge than the Golden Palm and Silver Fox.

The bunkers on the Silver Fox (7,006 yards) aren’t as demanding as on the Golden Palm – – there is only 50 – but water comes into play on 16 of the 18 holes, beginning with an opening drive on the first hole and ending with water all along the right side of the 18th fairway. The combination of the white, marble sand bunkers and wall-to-wall Celebration Bermuda grass makes the Silver Fox one of the more beautiful courses in all South Florida. It’s also one of the toughest.

And then there is the world-renowned Blue Monster – Dick Wilson’s masterpiece that in 2014 was restored as close as possible to its original design, which played host to the PGA TOUR for almost 55 years. At 7,590 yards, the Blue Monster features long, flowing fairways (stand on the first tee and you get the idea), Bermuda rough and deep bunkers. The undulating greens always present challenges, particularly for first-timer to the Blue Monster.

By the way, the Blue Monster isn’t named because of its water hazards, but because of the original blue tee markers from when the course opened more than 50 years ago. It’s a classic South Florida layout that’s a “must play’’ at least one time in South Florida.

Want to play each of Trump Doral’s courses? I suggest you begin with Red, then Gold and Silver and work your way up to the Blue. 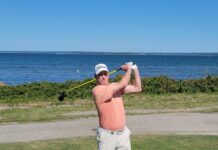 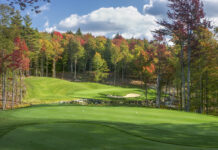