HARTFORD, Conn. – You would be hard-pressed to find someone who likes to play golf more than Ryan Cherry.

Especially for a good cause.

Cherry, the assistant boys golf coach at The Morgan School in Clinton who lives in Haddam, played 53 courses in all 50 states and the District of Columbia in 50 days, concluding with a round Aug. 11 with Morgan High golfers at Clinton Country Club, his home course. Then as if that wasn’t enough in what he jokingly called his “summer lunacy,” Cherry had an encore round with friends the next day at Portland Golf Club.

The only chance that thousands of girls in Connecticut have to compete at the high school level in golf is on boys’ teams. The only way these girls can participate in high school competitions is to outperform male teammates and qualify for one of the top five positions on their team, which is rare. So thousands of girls are invited to be included on the rosters of boys’ teams but never get to participate in matches.

Opportunity and money are the cause of the major disparity. Sports, other than golf, encourage girls and boys to become involved at an early age, but not golf. “Girls Golf Too” that Cherry and his three daughters founded before the trip would like to provide these opportunities since most schools are cutting budgets and programs to save money, making it difficult to justify new programs. GGT also would like to provide the justification and financial means to create new golf programs for girls and give every girl who wants to compete in golf with her peers the same opportunity that boys have.

Cherry, 53, who teaches at Jared Eliot Middle School in Clinton, started planning for his monumental journey two years ago during a conversation with Dr. Steve Mings, a friend in Boise, Idaho, who was trying to play all 50 states in his lifetime. Cherry suggested 50 states in one year and then progressed to 50 in 50 days.

“My daughters said if I was going to attempt something that crazy, I should do something good with it,” said Cherry, who also began saving for his adventure two years ago. “That’s when my daughters (Andi, 24, Kylie, 22, and Caroline, 19) and I came up with Girls Golf Too.”

GGT is a non-profit foundation formed to promote and finance golf opportunities for girls’ golf, not fund Cherry’s trip, which cost about $300 a day. Cherry got some help from friends along the way in the form of a tank of gas, a hotel, a round of golf or a meal. He paid for most of the trip, and GGT has a GoFundMe account that has raised $3,535. The goal is $15,000, and donations can be made at girlsgolftoo.org. Cherry’s journey is on his Facebook page or Instagram @girls_golf_too.

“My trip is over, but Girls Golf Too is just getting started and the trip was a way to kick it off and promote it,” Cherry said. “We’d like to sponsor some golf clinics for girls and hope to keep GGT active and productive for years to come.”

Cherry personally called every course on his schedule weeks and months in advance and had back-up plans at other courses. He made only four course changes and added three extra rounds – one in Washington, D.C., and second rounds in Connecticut and Hawaii. He scheduled flights from Seattle to Hawaii, Hawaii to Alaska and Alaska to Seattle months in advance, and he booked 39 hotel stays and nightly accommodations at the homes of friends.

“Ryan’s itinerary, dates, time and expectations were more than I could comprehend,” Mariellen said, “and to be honest, I did not think it would happen. When I realized it was really happening and I would have to learn how to mow the lawn, I became very excited for him. At the same time, he became very nervous that he may not be able to accomplish his goal.

“I am not a Facebook follower, but we spoke nightly and he gave me his updates on his score, conditions of the golf course and the wonderful people he met each day.”

Cherry said he couldn’t select his favorite few courses for several reasons. He said it was an honor to play the Navy-Marine course at Pearl Harbor, his only military course, and the vistas at several courses were priceless such as Ko’olau in Oahu, Hawaii, The Ledges in Maine, The Golf Club at Rock Creek in Idaho, Ozarks National in Missouri and Grand Bear in Mississippi.

Cherry’s best receptions came at Bacon Park Golf Course in Georgia from tournament director and assistant manager Fred Elmgren and Heritage Oaks Golf Course in Virginia with marketing and pro-shop manager Kelly Adams. He especially enjoyed playing with daughters Kylie and Carolina at Hot Springs National Park in Arizona and with Andi in Georgia, Tennessee and South Carolina, where he played his only college course at Furman University. He also had special feelings while playing with high school buddies and cousin Jill Wilcox in the Southwest swing, and the best public courses were Pinion Hills in New Mexico and Berkshire Valley Golf Course in New Jersey.

“Both of those (public) courses were as good as any on the trip,” Cherry said. “Every course had something special, whether it was layout/architecture, views or playing companions.”

Cherry, who has a 9 handicap, drove 11,785 miles and flew 6,903 miles while playing in seven different time zones and averaging 84.5 per round. He did all the driving and had friends or family along for the ride for 29 rounds in 28 states, including two in Connecticut. He played with 39 strangers, who are now friends, and one dog, Cujo, at Black Thorn Golf Club in Indiana.

To give himself a chance for an occasional day off, Cherry had nine 36-hole days – Massachusetts and Rhode Island, Maine and New Hampshire, Vermont and New York, Michigan and Indiana, Iowa and Nebraska, Wyoming and Montana, New Mexico and Colorado, Texas and Oklahoma and Maryland and District of Columbia. Cherry had a day off in Hot Springs with Kylie and Caroline, a day off in New Orleans with his wife Mariellen, a day off in Kentucky with Andi at Mammoth Cave National Park, a day off in New Jersey to attend The Northern Trust, the first of the PGA Tour’s three FedExCup playoff events, and a day off in Connecticut the day after he got home before playing at Clinton CC.

Mariellen coaches field hockey at Haddam/Killingworth High School. Andi is a former HKHS swimmer and diver who graduated from Central Connecticut State University in June with a teaching degree. Kylie played field hockey and lacrosse at HKHS and was a captain for both teams, graduated from the University of Connecticut in June and is now attending graduate school at the University of Florida, studying to become a veterinarian. Caroline was team captain for her soccer and lacrosse teams at HKHS and is currently attending UConn. All three daughters are recreational golfers.

“We played 18 holes in Alabama, just the two of us,” Mariellen said. “It was nice to spent time together are five weeks apart. The people in Alabama were wonderful, and Ryan bought a soaker golf hat to keep his head cool and I came away with a nice golf shirt after being chased by squirrels. We picked our daughters back up and headed down the shoreline to Florida in search of good shrimp. We left Ryan at Tallahassee Airport with enough time to pick up our oldest daughter, Andi, at the Savannah Airport.

“This summer has been a whirlwind for our entire family, but I can say that I have never been more proud of my husband of 26 years for saying what he is going to do and doing it. Go Girls Golf Too!”

Kylie isn’t surprised by what her “awesome” father was trying to do and how much that he has accomplished already.

“My dad has always taught me that the sky is the limit and there is nothing that my sisters and I cannot do if we set our minds to it,” Kylie said. “I am so proud of my father for completing his mission that he set out planning a couple of years ago. It seemed like a crazy dream when he first thought it up, but he proved once again that you can make any dream a reality.

“I am most proud of the cause that he was golfing for. A lot of young girls do not get the same opportunities as boys do to learn and grow in the sport of golf because it is male dominated. I played lacrosse rather than golf in high school because there was not a competitive team for girls, although there was one for the boys. I think Girls Golf Too is a way for my father to try and bridge the gap and show more young girls that golf is an amazing sport for any gender to pursue.

“I think raising three daughters will make a feminist out of anyone, and I am so proud of my dad for trying to bring about change, not only for his three daughters but for other young women who might not realize what opportunities are out there for them. I had a great week with him when I joined him for the stretch of the trip along the Gulf Coast. I always have a wonderful time when I get to golf with my dad, and it was really special to see the passion that he had for achieving his 50-50-50 goal and that dedication that he has for Girls Golf Too.”

Ryan said the expansiveness of the trip and his game changed dramatically during his journey.

“In the beginning of the trip, I struggled with the scope of my undertaking and with my golf game,” Cherry said. “I was preoccupied with logistics and did not take advantage of the wonderful adventure I was on. As I moved forward on my journey, I began to appreciate the experience more. I realized that the trip was about people, relations and good causes, not golf.

“It was funny that when I stopped worrying about golf and miles and states, my golf game came around and I enjoyed the ride. I met so many interesting people that were so supportive of my endeavor and GGT. I heard so many great stories. I had a tremendous amount of support from close friends and complete strangers on the road and through social media. I reconnected with so many friends that I have neglected at times in the past, and I built on existing relationships with my family and friends.

“I would recommend the trip to anyone interested in a life-changing experience, whether they are golf fans or not!” 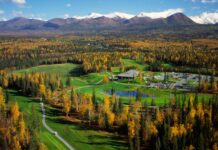 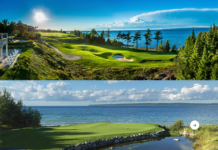 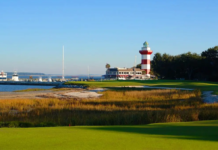 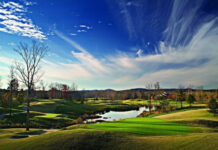