HARTFORD, Conn – University of Connecticut men’s golf coach Dave Pezzino was one of six Division I coaches and 15 people overall named to the PGA of America advisory council to oversee the 33rd PGA Minority Collegiate Championship and PGA WORKS Career Expo on May 9-12, 2019 at PGA Golf Club in Port St. Lucie, Florida.

“The mission of the PGA Minority Collegiate Championship Advisory Council is to align PGA staff, with college coaches, athletic administration and related golf and business leaders to establish a collaborative environment designed to share expert perspectives and drive strategic planning that can enhance our overall program, while consistently shaping the narrative of the PGA Minority Collegiate Championship and PGA WORKS Career Expo moving forward,” Clark said.

The 54-hole PGA Minority Collegiate Championship is a stroke-play event played in six divisions: NCAA Men’s Division I, Men’s Division II, Men’s NAIA, an overall Women’s Division (team), Men’s Individual and Women’s Individual. While many of the participating teams represent historically black colleges and universities, the individual competition is open to all minority men and women student-athletes playing collegiate golf at the Division I, Division II or NAIA levels, or participants who are enrolled in one of the PGA of America’s PGA Golf Management University Programs.

A key component of the event is the PGA WORKS Career Expo, where student-athletes are exposed to internships and employment opportunities, as well as networking and career development sessions supported and attended by leading golf companies.

“The PGA Minority Collegiate Championship and PGA WORKS Career Expo is unlike any event for student-athletes, as it provides a top-level golf championship in concert with a career development program designed to cultivate the next generation of golf industry and business leaders,” Clark said. “Each year this program gets stronger, backed by the quality of the players participating, combined with the involvement of national corporations and organizations in the career expo. It creates unmatched networking and career opportunities for our participants.”

The inaugural Championship was conducted in the spring of 1987 at Highland Park Golf Course in Cleveland. Since 1998, PGA Golf Club has hosted the Championship, and in 2006 the PGA of America was granted complete ownership and management of the Championship by the National Minority College Golf Scholarship Fund.

The PGA of America is one of the world’s largest sports organizations with nearly 29,000 professionals who daily work to grow interest and participation in the game of golf.

TWO TO BE INDUCUTED INTO HALL OF FAME

John Paesani and Bob Ruby Jr. will be inducted into the Connecticut Golf Hall of Fame during the Connecticut State Golf Association’s annual meeting December 4 at Woodway Country Club in Darien.

Paesani, 59, the head pro and general manager at Norwich Golf Club for 22 years before moving to The Bay Club at Mattapoisett in Massachusetts in 2012, has been a PGA member for 32 years while surviving cancer surgeries in 2013 and on Oct. 15.

“My general approach has been to keep doing what I do during any of the treatment/process I’ve gone through,” said Paesani, who was inducted into the Connecticut Section PGA Hall of Fame last year. “I worked and played right up to my surgery date (in October), trying to stay as busy and fit as possible to reduce any down time. I am honored and humbled by the Connecticut Golf Hall of Fame selection. My father always told me, ‘Work hard, be honest and good things will happen.’ This selection proves the truth in that theory.

“There are only a handful of PGA Professionals that are members of both Connecticut golf halls of fame. To be mentioned in the same breath as Ed Burke, Bob Kay, Dennis Coscina, Fran Marrello, Don Hoenig and Doug Dalziel as players is very special to me. It is a tremendous honor that I’m looking forward to sharing with a very special and supportive group of family and close personal friends.”

Paesani was an active member of Connecticut Section governance, serving many years on the Board of Directors and as Tournament Committee chairman, was on the PGA of America Competitions Committee and received the Section’s Presidents Award for fundraising in 2010. A Quarter Century member of the PGA of America, Paesani also worked as an assistant pro at the Golf Club of Avon, Dedham (Mass.) Country & Polo Club and Dorado Beach Golf and Tennis Club in Dorado Beach, Puerto Rico, and a teaching pro at Brae Burn CC in Newton, Mass.

Paesani was hired at Mattapoisett to be “a support role guy” for Greg Yeomans, who joined Paesani’s staff at Norwich GC in 1994 while attending UConn. Yeomans began his pro career at the Black Hall Club in Old Lyme and then worked at Sterling Farms GC in Stamford and Stanley GC in New Britain before going to Mattapoisett. When Yeomans was promoted to general manager/director of golf, he named Paesani the head pro.

“I reluctantly accepted, not really wanting to go back into management,” Paesani said. “Last year we hired Ben Egan as ‘head pro in waiting’ and I was allowed to tutor/mentor him. Ben was named head pro this season, and I continue to serve in the mentor/role model, a role I have relished. I have a very special relationship with Greg and his family. He is like a brother to me and his wife Ann and children Jake (a UConn freshman), Cassidy and Braden are extended family for me. Coming to Mattapoisett has been a wonderful experience for the second half of my golf career. I hope to continue to be a vital member of the staff there for many years to come.”

Tom Hantke, who is in his 25th year as executive director of the Connecticut Section PGA, remembers Paesani as a standout in many areas.

“John always seemed to elevate his game the bigger the competition and stage,” Hantke said. “In addition, he qualified for and played in the 1997 PGA Championship at Winged Foot [in Mamaroneck, N.Y.]. He brought the same competitive fire he showed on the golf course to the board room when he served as a director and chaired a number of committees.”

Paesani has collegiate coaching experience as the associate head men’s golf coach at UConn (1996-2001), when the team won the 1997 Spring New England Championship and qualified for the NCAA Regional Championship in 1997-99. He also holds five course records, including at the Golf Club of Avon, where he shot 64 in the final round of the Connecticut Open to win by a stroke over amateur Steve Sokol when he should have missed the cut. Paesani shot 74 in the first round and was ready to leave for a tournament in New Hampshire when the cut was suddenly changed late in the day to anyone with seven strokes of the lead. He was at that number so he got to play the final 36 holes the following day, when he shot 69 and 64, which was then a record course and capped by a 60-foot downhill chip-in for eagle 3 on the final hole for a back-nine 31.

“I’m the only person who ever won a tournament after missing the cut,” Paesani said with a chuckle. “That was my most spectacular win after the cut drama.”
Paesani said his most meaningful win was the 2014 Quarter Century Championship because it came six months after undergoing treatment and multiple surgeries for colon cancer. His biggest thrills have been his son, Matt, caddying for him in the 2010 and 2011 U.S. Senior Opens and fond memories of a supportive family, especially his father, who was omnipresent at countless golf competitions.

And speaking of memories, there was the 1988 PGA Championship.

“I had a locker next to Arnold Palmer, who wasn’t in the champions locker room because the PGA was the major he never won,” Paesani recalled. “As I was tying my shoes for the opening round, he entered the locker room, sat down next to me and had a brief conversation before teeing off. Quite a thrill.” Paesani earned a Bachelor of Science in marketing from Central Connecticut State University, where he was an All-New England selection in 1980-82 under coach Lowell Lukas, and a Master of Arts in Sport Management from UConn where he coached the golf team with Joe Gianelli until his death. Paesani became a PGA of America Class A member in 1985, was recertified in 2007 and enjoys off-course activities such as the beach, travel and live music while currently learning to play the guitar.

Ruby, of Madison, was not only a standout player, but he also has been a longtime volunteer for the United States and Connecticut State golf associations. Ruby has officiated in more than 30 USGA championships, including five U.S. Opens and three U.S. Amateur events. His involvement with the CSGA for over a half-century includes as a rules official for 18 years and as a two-time captain for the Challenge Cup Matches and the Tri-State Team. 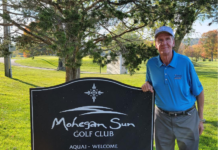 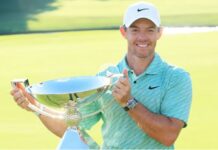